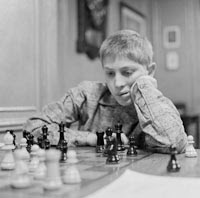 I don't play chess, but I admire those who do. That said, I've always thought of it as more of a cerebral than a creative pastime. Having just listened to the latest episode from the (consistently excellent) Radiolab show on Games I now realise that I was wrong.

Among other things the show explored the (new-to-me) chess concept of The Novelty. Simply put, all professional chess games - and the sequence of moves by the two contestants - have been recorded in 'The Book' (now an online resource used and studied by all serious chess players). So every opening sequence of moves has been played (and recorded) in thousands of games before. But as each new game proceeds, the number of times an exact sequence of moves has previously occurred gets fewer and fewer. And eventually a move occurs that has never been recorded before. That moment is called The Novelty - and the game is now said to be 'out of Book'. Literally, something has happened that has never been recorded before in the history of chess. It's that novel.

By way of illustration, Radiolab relates the extraordinary story of The Game of The Century in which a 13 year old Bobby Fisher (pictured) managed to 're-write' the book by deliberately sacrificing his queen in order to win a game against a much older, more experienced adversary.

Which brings me to the world in September 2011: it feels like the global economy is 'out of book' and all of us as players are at the economic equivalent of The Novelty. The book of policies for dealing with the worsening crisis no longer has a game plan for us to follow. Sure there are things that each of us can do individually - as employers, citizens, taxpayers, voters, even as nations as the Swiss have just demonstrated - but it's beginning to look like there's no more road left to kick the can down.

Then again, maybe that's the point: The Novelty is an interface between creativity and danger - and with no prior plan to follow then the winner will be the one who breaks through to a new sequence of moves that are ultimately successful. The game of chess reminds us in microcosm what Hayek warned about in macrocosm in his Nobel speech:


"The recognition of the insuperable limits to his knowledge ought indeed to teach the student of society a lesson of humility which should guard him against becoming an accomplice in men's fatal striving to control society - a striving which makes him not only a tyrant over his fellows, but which may well make him the destroyer of a civilization which no brain has designed but which has grown from the free efforts of millions of individuals."

The game of the 21st Century is upon us.
Posted by Gerard O'Neill at Saturday, September 10, 2011