The Revolution Will Be Advertised 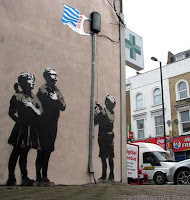 I saw Banksy's Exit Through The Gift Shop the other day. It's one of the smartest - and funniest - documentaries I've seen in a very long time. I really had not appreciated the energy and artistry of the street art 'movement'. Now I do.

It struck me that street art is a perfect manifestation of late 20th/early 21st century urban life. The ugly utility of so much of our city landscapes (blank walls and bland surfaces) seems perfectly designed to provide a 'canvas' for an aspiring street artist. Though it's fair to say few are as artistically gifted as Banksy.

Daniel Little poses an interesting question on his blog Understanding Society. He wonders why advertising and marketing didn't feature in the writing of the earliest economists? Especially given its pervasive nature nowadays. Little's hypothesis is that it was due to urbanisation in the late 19th century: the concentration of large populations in cities and the emergence of extensive public transport networks provided an unmissable opportunity to market to a growing mass market. And to do so efficiently. He's probably right. The same applies to street art: the combination of large populations and eye catching locations is a spontaneous manifestation of the same impulse to reach an audience. Even if the art has a much shorter shelf-life than a billboard.

What's also striking about Exit is the global nature of street art. Symbols, icons and ideas from one continent rapidly jump to another: sometimes carried by the same artist. It is another example of what Charles C. Mann calls the homogenocene: the mixing of biological systems and even cultures to create mixed or homogenised blends. Mann attributes the bland urban uniformity that now confronts us throughout the world not to urbanisation per se, but to the Spanish colonisation of the Caribbean. A somewhat less obvious explanation that Little's. But worth a read.

Street art will continue to shape (and be shaped by) our urban landscapes for a long time to come. And maybe for the better.