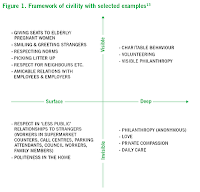 Kindness is the parent of kindness.
Adam Smith

The Young Foundation have published a thought-provoking report recently called Charm Offensive: Cultivating Civility in 21st Century Britain. The Adam Smith quotation is from the report. So is the graph: a neat framework for scoping the full extent of civility.

It's also a very British - even English - report. In my experience the English enjoy a deep culture of civility. Not everywhere and always, nor in every interaction. But enough for a visitor to come away with an abiding sense of English civility. So it seems apt, in a way, that a research institute in England should be fretting about something that - I suspect - doesn't occupy nearly as much attention in other countries. Including Ireland. I think we assume in Ireland that our smallness - and the fact that nearly everyone is three-degrees-of-separation away from each other - is enough to keep us civil.

The Young Foundation report sets out lots of examples of how civility is being shaped by cultural, economic and other forces in Britain. Some are working against civility - busy lives, for example - others are working for civility - e.g.: ethnic diversity and the need to 'get along together'. The report recommends a number of ideas - including nudge-type applications of behavioural economics - to induce a great level of civility in society.

One of the issues they could do with giving more attention to is the decline of shame. Jennifer Jacquet blames the decline of shame as a 'civil-izing' force on the ephemeral nature of so many interactions and relations in today's world which loosen the bonds that gave shame its power. She cites the example of economy-wrecking bankers and their bonuses. Indeed. The problem with shame, of course, is that implies passing judgement - and passing judgement on other people's lifestyle choices is now considered politically incorrect most of the time. Indeed, there are some who argue that political correctness has replaced old-fashioned 'niceness' as the driving force of civility. Which can be problematic.

But here's the thing. I do think that the level of civility in Ireland is quite high - whether by accident or design. And it is something we should make more of when thinking about our future. We are number 2 in the world in terms of civic engagement after all. Also civic, civility and civilization all share the same route in the Latin for citizen. Citizenship is about belonging and as we look ahead to 2016 and the centenary of the Rising we might use the occasion to think again - and together - about what it means to be Irish in the 21st century and how it binds us together.

In a civil manner of course.
Posted by Gerard O'Neill at Thursday, October 20, 2011