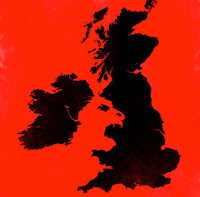 Whilst Irish eyes are focused on Brussels and Berlin, we shouldn't overlook what's happening to our next-door neighbour.  Only last week the Governor of the Bank of England - Sir Mervyn King - warned that Britain's debt difficulties are "the most serious we've ever seen since the Great Depression of the Thirties, if not ever". He was so spooked he announced a further round of quantitative easing: £75 billion worth, and that's only a starter.

His outburst coincided with the downgrading of 12 British banks by Moodys - so perhaps the Governor knows something the rest of us don't...?

As ever, Tim Morgan - from Tullet Prebon - has a crystal clear explanation for the mess Britain is in (updating their extraordinary analysis that I blogged about previously):


Between 2003 and 2010, Britain – by which in this context we mean both the government and individuals – borrowed an average of 11.2% of GDP each year. This isn't sustainable, and never was. Borrowing at this scale did deliver apparent 'growth', but at an appalling cost, with each £1 addition to national output coming at a cost of £2.18. Meanwhile, between 1999-2000 and 2009-10, government spending increased by 53% in real terms. The two drivers of the economy, then, were public spending and private borrowing. The denouement of this recklessness coincided with a global banking crisis, but no amount of 'neo-endogenous growth theory' could disguise the fact that basing national prosperity on borrowing always contained the seeds of its own destruction.

That last point is crucial. For as Morgan explains, most of the British economy is now ex-growth:


The first problem faced by the UK, then, is that both of the economic drivers of the last decade – private borrowing and public spending – are dead in the water. The second (and bigger) problem lies in the way in which the era of recklessness skewed the economy against organic growth.

The biggest beneficiaries of private borrowing were real estate, construction and financial services. With the era of ever-increasing private debt well and truly over, these sectors cannot grow, which is a bit of a snag, because they account for almost 40% of economic output.

Meanwhile, the ending of public spending largesse has also put a stop to growth in healthcare, education and public administration, collectively a further 18.8% of the economy. With falling real incomes impacting retailing as well, the total proportion of the British economy which is now ex-growth rises to almost 70%.

Which isn't good news for us in Ireland. We export more to Britain than we do to France and Germany combined. There are tough times ahead for Britain - including the real risk of a prolonged recession. Britain, like Ireland, overdosed on cheap credit and is now going through economic detox. And like Ireland, our neighbour face a stark choice:


... there are no wholly good options, only choices between the fairly unpleasant and the downright nasty.

Let's hope for our neighbour's sake - as well as our own - that Britain makes the choice quickly and that the after effects are not contagious...