When The Lever Breaks 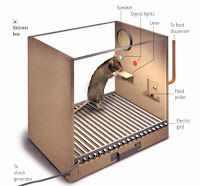 Golem XIV compares the world's leaders to a stress-out rat in a Skinner Box as they keep pressing the 'confidence bar':


Seems clear to me our leaders are just pressing that bar because they don’t have the imagination to think of anything else.  They never did know why pressing the bar delivered the reward. Economics is a Skinner box, a black box, where there no one can see and certainly none of them understands, the mechanism at work. They have theories about the underlying rules and mechanisms and assumptions about human nature and the nature of economic behaviour. Their assumptions are almost all fatuous from any kind of evolutionary perspective. And their theories about the mechanisms are generally drawn from dubious first principles or based on correlations which they have noted – when this has happened in the past then this has followed. But sadly for them the correlations are very often ephemeral. They hold true for a decade or two and then seem to stop being correlated.

...And so they continue to press the bar and attribute anything positive that subsequently happens to their bar pressing. While anything negative is attributed to not pressing it correctly or to malign external factors. If nothing happens, well press it again a bit harder. Remember confidence in the bar is the key to seeing the policy through!

Where's PETA or the ISPCA when you need them?
Posted by Gerard O'Neill at Wednesday, October 19, 2011