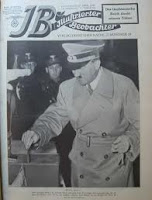 A wise man once said that in economics there are no solutions, only trade-offs. The same goes for politics. Democracy is nothing if not a process of trade-offs: 'which do you want: lower taxes or higher spending?' For a while our politicians (and others in the PIIGS) pretended there were no trade-offs: you could have lower taxes and higher spending. That hasn't worked out so well.

The problem is: there are no trade-offs any more, nor any solutions. There is simply the programme - what the Troika wants. Let's be clear: most of our problems in Ireland are self-inflicted. We didn't want to make trade-offs. Though in fairness we are also suffering from a wider problem: the failure of the ECB to make trade-offs. That's why - as Colm McCarthy recently pointed out - 40% of Ireland's debt/GDP ratio is solely the result of the ECB's insistence that we bailout the private creditors to private banks. The trade-off should have been for the ECB to provide the money to pay the creditors rather than let Ireland leave them to their own devices (and haircuts). But no: the ECB wants us to pay the creditors and no haircuts.

The politicians of the PIIGS are not the only ones who can't make trade-offs.

But there's a bigger problem: if there are no longer any trade-offs then we no longer have a democracy. There is nothing to be decided: only targets to be met. In which case: why do we need political representatives, let alone elections? The answer appears to be that we don't. Increasingly our leaders are technocrats - mostly alumni of Goldman Sachs as it happens.

Of course there is a precedent for this: in times of war, democratic countries - including Ireland - will often form a 'government of national unity' or some such thing. Until the emergency is over, of course. But what happens if the emergency doesn't end any time soon? In a fascinating review of Francis Fukuyama's new book, philosopher John Gray criticised the Western hubris that thinks our model of liberal democracy and free markets somehow represents the 'inevitable' outcome of societal development. A brief perusal of history would suggest otherwise. That and the 'brute' success of China and Russia.

Democracy has shallow roots in Ireland. Instead of a trade-off between representative democracy or participative democracy we have ended up with managerialist democracy. Even the Cabinet don't get to make decisions any more - as explained by Fintan O'Toole.

And that's what worries me. We are only in the early stages of the Troika's programme and already our democracy - and that of other European countries - is severely weakened. The Germans elected Hitler in 1933 (though the Nazis only got a minority of the votes). But that only came after a decade-long roller coaster of economic depression, hyperinflation, and crippling reparations. A desperate people eventually reach for desperate solutions when democracy fails to make the necessary trade-offs: or no longer can.

I fear we are living in the age after democracy. I hope I am wrong.
Posted by Gerard O'Neill at Tuesday, November 22, 2011