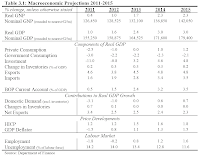 The Department of Finance has seen the future, and it doesn't look great. The Medium-Term Fiscal Statement paints a less than rosy picture to be sure. But what if it's still too optimistic? Robin Hanson points to a recent review of forecasts by the equivalents of Ireland's Department of Finance in 33 countries which found that:

Of course, our Department of Finance might be better at measuring and forecasting macroeconomic variables than finance ministries elsewhere. Hmmm.

The reality is that the Department's forecasts are like a business application for a bank loan. The applicant inevitably emphasises the positive, without exaggerating things to the point it lacks credibility. But it's still spin - or a 'scenario', if you prefer. There is nothing wrong with such an approach per se - so long as you see it as a communications exercise rather than something more profound. Or more useful.

There is, however, a bigger challenge than one of mere accuracy. And that is that we just don't know what drives growth, or what the future holds. Russ Roberts gets to the heart of the matter in a recent critique of Paul Krugman. Economics is more about ideology than about engineering:


...when we’re dealing with complex systems, truth is very hard to come by. To claim otherwise is the pretense of knowledge. What we are really debating is ideology and philosophy. That’s the fight of the century - more bottom-up or more top-down. That’s what’s really at stake. We may pretend otherwise, that we’re just economic engineers trying to make the system work better but I think that’s an illusion fostered to encourage people to buy our intellectual wares.

We simply don't know enough about what makes any economy grow to be able to forecast the economic future, let alone shape it.  According to Charles Kenny some 18,000 statistical analyses have been published since 2005 alone on what drives GDP per capita growth. And the answer?


So what’s the secret to economic growth? The short answer is that there appears to be no short answer. ... the available data don’t allow us to make any hard and fast statements about “what causes economic growth” at all.  That there might not be a holy grail of growth policy, however, is unlikely to prevent people of economic faith from looking. The next six years will undoubtedly see another 18,000 papers on the topic. Just don’t spend too long reading them. Episodes of fast growth and stagnation around the world will continue to take us by surprise.

Worth remembering as the debate about austerity etc gathers pace in the years ahead. And as we ponder the probability of Ireland experiencing the future forecast by the Department of Finance. I'll leave the last word to Charles Kenny again:


There’s a reason it is hard to predict the future: It hasn’t happened yet.