On January 1st 2002 - the day euro notes and coins entered circulation in Ireland and throughout the eurozone - an ounce of gold would have cost you just over €300. Today, as the tenth anniversary approaches, an ounce of gold costs €1300. The chart tells the story - from the excellent World Gold Council website (free registration).

My guess is that gold has a big future ahead of it in the eurozone. With the ECB and Germany suggesting that Italy puts up its gold reserves as collateral for future bailouts, we are going to hear a lot more about gold and gold reserves in the coming weeks and months... and years. The funny thing is: the Germans could probably transition to 'Der Gold Mark' more easily than any other eurozone country as they have the largest gold reserves in Europe (and the second highest in the world). Then again, maybe that's the plan...

Here in Ireland, our leaders are not ones to follow the gold herd, no sirree. Though maybe that is changing. In the chart below I have plotted the price of gold in euro and the value of the Central Bank of Ireland's gold reserves between January 2003 and September 2011: 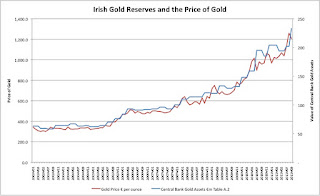 According to the World Gold Council report on World Official Gold Holdings October 2011, Ireland has 6.0 tonnes of gold reserves, with a value equivalent to 15.4% of the country's total foreign reserves. We used to have 16 tonnes as recently as the late 1990s. Just to put that in perspective: we currently rank number 72 in the world in terms of tonnes held - the lowest reserves in the eurozone. By the way, the eurozone average for the share of foreign reserves held in gold is 66.3%. While Germany holds 74.7% of its foreign reserves in gold...

So forget Plan A or Plan B - Ireland needs a Plan G: just in case the eurozone doesn't get to celebrate the tenth anniversary of its launch into circulation.
Posted by Gerard O'Neill at Monday, November 07, 2011