Yet another 'did-they-understand-the-question?' survey finding. It turns out the majority of Irish people are thriving at the moment, compared to just a minority of Germans... 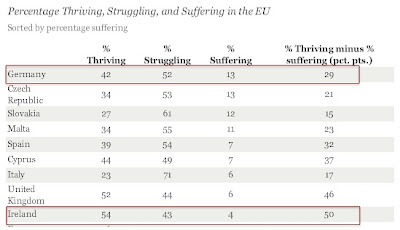 The research - by Gallup - even finds that 85% of Irish people are satisfied with their standard of living (and all the things they can buy and do). That's just below the Germans at 88%, and just above the British at 84%.

Things are less rosy when asked if people feel their standard of living is getting better or worse: only 25% of the Irish think its getting better, 45% say it's getting worse. The Germans are more bullish in this regard: 31%/23%.

For me, the key question is what does this says about the German zeitgeist right now? The fact that more than half of all Germans feel they are struggling (and another 13% are suffering) will undoubtedly convince their politicians not to agree to anything that puts a further strain on their already burdened electorate. Like paying more taxes to fund budget deficits/bank bailouts in other eurozone countries.

Stepping back from the polls, my sense is that the first quarter of 2012 will be one of historical significance for Europe. And that's besides an Irish referendum. I'll be paying a lot more attention to the mood of German voters over the next few months. We probably all should.
Posted by Gerard O'Neill at Thursday, December 15, 2011