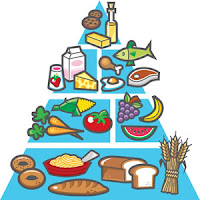 Fat makes you fat, right? Wrong. When it comes to food we have been subject to another example of scientific myopia these past few decades - as with the science of mental illness. That's according to Gary Taubes, interviewed in a recent episode of EconTalk.

It appears we've got the food pyramid all wrong: the causal link between fatty foods and heart disease, cancer and diabetes ignores a far more dangerous and direct threat. It now appears that refined carbohydrates, combined with sugar, are the main sources of the epidemic of obesity and diabetes now gripping developed countries (or 'diabesity' as Taubes calls it in a fascinating New York Times article). It is forecast that half of all Americans will be obese by 2020.

But look what makes up the base of the food pyramid we're all supposed to model our diet on. That's right, carbohydrates... My read of Taubes and others is that instead of a food pyramid we'd be better off with a 'food diamond', i.e.: shrinking the carbohydrate base to mirror the top of the existing pyramid.

Will policy makers and health professionals make the necessary changes? Certainly time is of the essence: the most recent report on Growing Up in Ireland shows that more than a quarter of Irish 3 year olds are overweight or obese (20% and 6% respectively). Rising to 9% obesity in those in the lowest socio-economic groups: 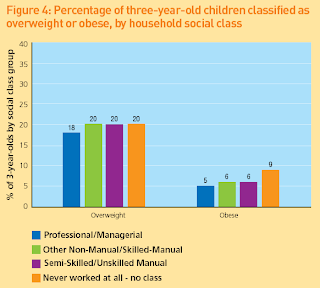 But I wouldn't bet on change happening any time soon. As Taubes makes clear, once a certain scientific paradigm is established (even in the absence of any real science behind the paradigm) it's extremely hard to change it. But change can come from the bottom - more and more people are beginning to realise the fatal flaw in the food pyramid's carbohydrate base as they experience weight loss by significantly reducing their consumption of carbs.

Cracks in the base of the food pyramid might just help us raise a healthy generation of children, rather than face an epidemic of diabesity in years to come.