One way to solve this eurozone-specific problem of capital shifts would be to prohibit member nations from selling government bonds to investors from other countries. Allowing only the citizens of a nation to hold that government’s debt would, for example, prevent the investment of Spanish savings in German government debt. Most of the Spanish savings that have been used to buy other countries’ government debt would therefore return to Spain. This would push Spanish government bond yields down to the levels observed in the U.S. and the U.K., thereby helping the Spanish government implement the fiscal stimulus required during a balance sheet recession.

...Ending the eurozone’s crisis will require a two-pronged approach. First, international bodies like the EU and ECB need to declare that member countries experiencing balance sheet recessions must implement and maintain fiscal stimulus to support the economy until private sector balance sheets are repaired. Second, eurozone member nations must declare that in ten years they will prohibit the sale of government debt to anyone other than their own nationals.

Of course, ten years is a long time to wait. Though taking a long time appears to be one of the defining features of a balance sheet recession: 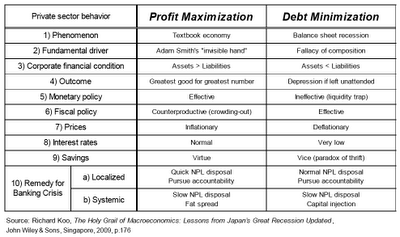 Mind you, a balance sheet recession coupled with a bank bailout just might take even longer to work itself out...