What is happening in Switzerland? For a while there they were the poster child for the benefits of not being in the eurozone. Then they went and pegged their currency to the euro. How's that going? Not good, if consumer spending on groceries - via Nielsen - is an indicator: 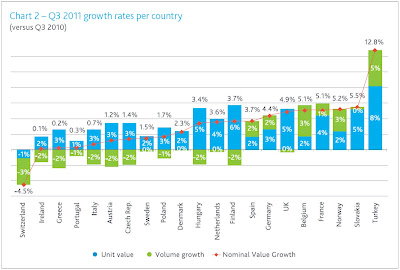 Makes Ireland and Greece look good. Turkey, on the other hand, is booming. I wish them well, and the best of luck with the old 'soft landing' trick that will follow. Of course, figures for one quarter do not tell us everything. Which is just as well as yesterday's CSO figures for Q3 2011 national accounts were, well, grim. The chart below shows the trend in growth - or 'ungrowth' - for Irish consumer spending, nominal and real, seasonally adjusted: 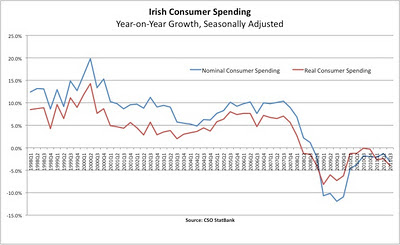 Consumer spending is down nearly 18% from its nominal peak in Q1 2008, and by 13% since its inflation-adjusted peak in Q4 2007. Real spending has now contracted for 14 quarters in a row. Which makes the more recent Swiss squeeze seem much more manageable somehow.

The 'good news', however, is that Irish consumers are still spending like its Q4 2005, in terms of their total spend in billions of euro. Though somehow it doesn't feel like it. Possibly because spending was still rising in late 2005, whereas it is still falling in late 2011.