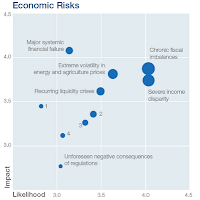 I was on George Lee's show The Business yesterday, talking about the prospect of 10 more years of austerity in Ireland (a la Richard Tol's 'a plague on both your houses' parting shot).  I was a little more sanguine than George (or Richard) about the next ten years. As I pointed out, you can tell economic forecasters have a sense of humour because they use decimal places...

In our increasingly attention-deficit culture we need to read more history. If I had been speculating about 'the next ten years' back in January 1912 I might have anticipated a bit more bother in the Balkans, some trouble introducing Home Rule in Ireland given Unionist intransigence, and not much else... It is unlikely I would have anticipated the First World War, the Russian Revolution, the disappearance of four empires, the Irish War of Independence and a global flu pandemic thrown in for good measure. It turned out 'the next ten years' were full of surprises.

Today, as in 1912, the world appears full of risks. The chart is from the WEF report on Global Risks 2012. The risk with the greatest potential for an adverse impact is that of 'Major Systemic Financial Failure', defined as:


A financial institution or currency regime of systemic importance collapses with implications throughout the global financial system.

Hmm, I wonder do they have any particular currency regime in mind? The bigger point is that an increasingly complex and integrated world is more vulnerable to 'a cascade of shocks', as noted in the Chatham House report on Preparing for High-impact, Low-probability Events: Lessons from Eyjafjallajökull. Or what historian Norman Davies calls 'the pitiless passage of time'. Much the same way the highly integrated world if pre-WW1 Europe proved to be vulnerable.

But the shocks can be on the upside too. Europe doesn't have an economic crisis: it has a banking crisis. Europe's major banks are bust: they've too much toxic debt on their books, including the bonds of eurozone governments that can't and won't be repaid. Right now the ECB, the banks and eurozone governments are playing a protracted game of musical chairs, and so far the banks are winning... But eventually the music will stop and the banks will be left standing. Democratically elected politicians will likely then be forced to nationalise the banks en masse, debts (sovereign and other) will be written off en masse and the hum drum task of producing goods and services that others want to buy will resume and once again improve the lives of Europeans.

We like to think of ourselves as superior to our ancestors. After all, they believed plagues and earthquakes and the like were the punishments of an angry god or gods. And yet here we are, in the early 21st century, inflicting misery on entire generations and entire nations because the balance of digital 'noughts' and 'ones' on computer servers - which is what comprises money nowadays - is somehow 'out of balance'. And so we are punished by an invisible imbalance that none can see but all must fear and worship. We're not all that superior to our ancestors after all.

If something can't go on forever it won't. Nor will the eurozone's game of musical chairs, nor Ireland's economic penury.
Posted by Gerard O'Neill at Sunday, January 15, 2012