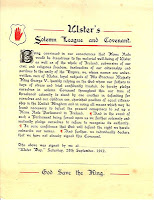 Johnston McMaster gave an interesting talk recently on the relevance of the 1912 Ulster Convenant to today. The first part of his talk is a reflection on the world of his grandfather at the start of the 20th century, and his motivations to sign the Covenant. As McMaster notes, there are important links between the 1912 Covenant and the 1916 Proclamation, though mostly in terms of how much the worldview - framed by God and guns - of those who championed both documents has disappeared:

We now live in the post-nationalist, post-Christendom, post-Enlightenment, post-modern world. A whole worldview has gone, and we are far from sure yet what is replacing all these ‘posts’. And we may well be living now in a post-capitalist world, just to add to the uncertainty and the vulnerability. We are on a different planet from that of the Covenant in 1912 and the Rising in 1916. It is the angst, the insecurity and uncertainty, the fears around living in this ‘post’ 21st century world that might drive some to commemorate Covenant and Rising as the recovery of some paradise lost, some imagined identity, some lost power base or shattered dream. So commemoration is getting back to the past, or an interpretation of the past, a re-enactment that looks back to a romanticised past, recovering a paradise lost, which is really a desperate attempt to allay our angst, fears, insecurities and uncertainties. And such commemoration may become aggressive, militant, a show of militarism.

The text of his talk is here, by the way - ht Slugger O'Toole.

There is a new website dedicated to the Ulster Covenant, created by PONI: the Public Record Office of Northern Ireland. You can search the names of all those who signed the Covenant in September 1912 - there are even 360 O'Neills on the list! What is also interesting is the number of signatories from outside Ulster who signed the Covenant, in places such as Dublin and even Scotland. A reminder of how there was once a 'United Ulster' before partition.

Dr McMaster is also Reverend McMaster and the second part of his talk is about the wider meaning of Covenant in a Judeo-Christian context. He speculates about the possibility for a new convenant for both parts of the island based on an emphasis on God rather than guns. Though to be honest his proposals read more like a mildly left-of-centre political manifesto than anything that will inspire half a million people to gather together and sign (in some instances in their own blood - though apparently only one man did that).

I look forward to further debates about the relevance of 1912 - and 1916 - to our collective future in months and years to come.