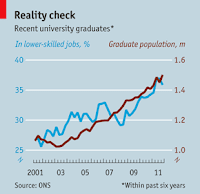 These are tough times to be a student. It was pretty tough when I was a student, but at least there were fewer of us competing for jobs when we graduated. But now it seems we are living through a student bubble (in most of the developed world) and the results are not pretty.

Nearly four in ten recent UK graduates are working in lower-skilled jobs (i.e.: ones they could have gotten without going to university) - image from The Economist. A percentage that has risen in lockstep with a near 50% increase in student numbers in ten years.

In the United States, yet another spectacular debt crisis is bubbling up thanks to student loans - rapidly on their way to a cumulative $1 trillion.

We've been spared the worst of this in Ireland thanks to 'free' third level education (or middle class social welfare if you prefer). Though we have not been spared the declining 'return on investment' to university education now evident in the UK. Peak Academia may be at hand.

If this were merely a cyclical downturn that gave way to an upturn (as it did for me in mid-1980s London thanks to Maggie Thatcher) then we wouldn't have much to worry about. But unfortunately this time really is different. The education system is failing men to a near universal degree (even the OECD now recognises this, fretting that care must be taken so that 'pro-girl policies do not end up discouraging the boys' - that ought to sort it). Though no sign of a European Equal Education Day just yet...

Beyond gender inequality, the real issue is the impact on those now approaching retirement. The pay-as-you-go ponzi scheme state pensions schemes in place throughout most of the developed world mean that those retiring need the young to keep earning. The plan was that more graduates would mean higher salaries would mean higher tax revenues would mean sustainable pension entitlements. It hasn't worked out that way. In the United States they are already talking about inter-generational conflict as the retiring Baby Boomer generation fights over a shrinking economic pie with younger generations.

Here in Ireland we can at least avoid the inter-generational conflict for a while longer. Though how we increase the return on investment in third level education (for students, taxpayers and those about to retire) remains far from clear.