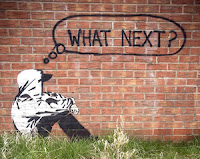 Europe is failing its youth. And not just Europe - in the United States, one in four young people have moved back in with their parents on account of the economy. Our young people face a radically different future to that of any generation of young people before them.

By 2020, it is estimated that more than half of all workers will be 'free agents' - or freelancers - moving from 'job' to 'job', or from assignment to assignment. Careers will be a thing of the past (as they are for many already).

Young people - all of us perhaps - are facing into a qualitatively different type of uncertainty about the future. Will Davies set out an interesting perspective on uncertainty on his blog Potlatch recently. He notes:


Many people, including economists, are prone to say that there are two types of situation, those which involve risk (and can be subject to probabilistic calculation) and those which involve uncertainty (and can not be subject to such calculation). This is entirely wrong. Knight's argument was that all situations involve uncertainty, as an existential fact of human life. But we have various pragmatic responses to it, including the construction of risk models, which succeed to varying degrees. Other pragmatic responses to uncertainty involve seeking to actively reduce it, through forms of concerted action and co-operation.

...The dice are loaded. It's not that life is unfair, which is something that most adults should be able to handle; it's that it's unfair in unfair ways. Liberalism, whether of a Rawlsian or a Hayekian variety, is something we might be able to stomach, if things really were left to chance (be it via the veil of ignorance or market spontaneity) but the dominant view, post-2008, is that they're not.

In considering a future and better economic policy paradigm, we need to consider the political status of uncertainty. Possibly we need to find appropriate spheres for liberal, tragic and comic perspectives on the future, and not confuse the three. Uncertainty won't disappear, but it will be distributed in certain ways.

The problem for your young people is that they carry an unfair share of uncertainty: no defined benefit pensions for them... Not that they'd care, of course, but ultimately they will face decisions - for example to get married, have children, buy a home - that carry with them not only the usual degree of uncertainty, but also an added layer of economic uncertainty characteristic of the freelance future.

So while the future is uncertain, the consequences of uncertainty are, well, a little more certain: a population implosion for one, and a disengaged, dis-enfranchised population of men for another.

Maybe those defined benefit pensions aren't so secure after all...
Posted by Gerard O'Neill at Wednesday, April 04, 2012