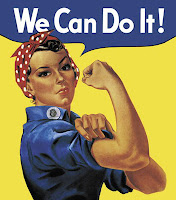 From the department of 'careful-what-you-wish-for' comes a German Bundesbank study which finds that:

Oops! But don't worry, it has nothing to with that nasty testosterone stuff. It's a lot simpler:


"Our exploration of the underlying mechanism suggests that this result is mainly attributable to the fact that female executives have less experience than their male counterparts."

Okay, admittedly the study was confined to banks and other financial institutions (where we know everything is carefully controlled and safely regulated). But it makes you wonder, would appointing inexperienced women to fill a gender quota for TDs be such a good idea?

Especially since appointing inexperienced men to the job of running the country hasn't exactly worked wonders for our national fortunes these past few decades...