I have seen the future and it's mechanical.

Amazon Mechanical Turk to be precise. In the future there will no longer be jobs - never mind careers - instead there will be Human Intelligence Tasks: HITs for short. I registered as a Mechanical Turk Worker to see what 'work' - or HITs - is available. For example, I can earn $4.75 for writing a 250-300 word article. Or I could translate 10 words from Amharic into English for $0.15. Most HITs pay closer to the latter than the former, by the way.

Amazon Mechanical Turk is a leading example of the Freelance Future I blogged about recently. Another is Demand Media - or the 'answer factory' as Wired called them. Demand Media have applied the HIT model to the creation of content. Again, no jobs - just 'Human Creativity Tasks'.

There are several key drivers of the HIT future:


On the last point, The Futures Company have published a fascinating report on the future of work which notes that:


Over the next ten years, it will become easier to tell what employees are doing, but harder to tell them what to do, as the four horsemen of data, devices, screens and sensors enable greater monitoring of the workforce. It will be possible for a postal delivery company to track the movement and behavior of one of their drivers to anticipate when she should (or shouldn’t) be taking a break; it may even be possible to watch employees through their screens using bio-directional screens that integrate depth and position detecting cameras with displays.

There could be productivity gains from pervasive surveillance which are of mutual benefit to employees and employers, for example remote supervision, or ‘spellchecker’ like devices which give feedback on task completion and performance.

If you think that all sounds a bit creepy, then what about employers demanding the Facebook passwords of prospective employees to see just what sort of people they really are?

Perhaps it is no wonder that today's youth are putting making money and being famous ahead of 'meaning' in terms of their life ambitions, as illustrated below: 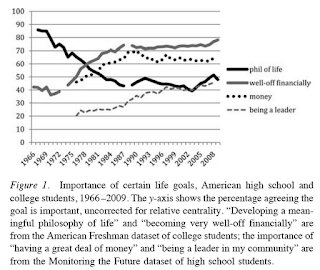 Faced with a future of unprecedented uncertainty we should not be surprised. In a world of Mechanical Turk Workers there will be every incentive to stand out - to win the HITs - and eventually to step off, once you've piled up sufficient financial resources. Assuming you can.

Though right now the future belongs to the Requesters.
Posted by Gerard O'Neill at Friday, April 06, 2012