Are We There Yet?

NAMA Wine Lake poses the question we'd all like the answer to: is the economy recovering? Having reviewed all available contemporary measures, his answer is, unfortunately, no.

My own company's monthly 'mood of the nation' tracker for May 2012, reaches a fairly similar conclusion - the percentage of Irish people who are optimistic about recovery because of 'news from other countries' has fallen back to among the lowest levels since 2009 (slide 8):

The Panic of Crowds

(Scary) chart of the day from Zero Hedge: 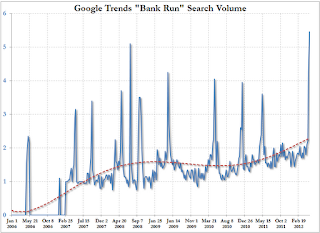 Ireland tops all other English-speaking countries in the volume of searches for 'bank run'...
Posted by Gerard O'Neill at Friday, May 25, 2012 No comments:

Is this it? The moment of Peak Government in Europe? Charles Hugh Smith certainly thinks Peak Government has arrived in the USA. Mind you, there's a way to go yet: as Constantin Gurdgiev pointed out recently, austerity is visible everywhere except in Europe's public expenditure statistics (as shown in the chart).

But the dream - or the nightmare - is only beginning. The Economist's Bagehot channels an Argentinian magical realist when he observes that:


Britons and other Europeans need to go through a similarly vertiginous moment. For decades workers, faced with exploding global competition, were compensated by governments with cheap goods, early retirement and welfare on credit: a dream of affluence for life to replace jobs for life. Now the competition is as intense as ever, societies are ageing and their nations are poorer than they thought only a few years ago. The boom years were the dream. Hard work and tighter belts are the new reality.

It's going to be a steep downward slope on the other side of the peak...

Not with a whimper but a bang. That seems to be the most likely scenario for the end of the eurozone in light of the (endless) crisis in Greece. But I am reminded of Benjamin Disraeli, who observed that:


What we anticipate seldom occurs; what we least expected generally happens.

As for what we anticipate, a recent international opinion poll by the Boston Consulting Group points to a very gloomy future: slim minorities of citizens in the developed world expect their children to live a better life than the present generation. Most expect the economic and financial crisis to get worse, not better. Anxiety about the future is high and even rising.

But what if Disraeli is right? What if the thing we most anticipate (me included) - that the eurozone drama can only end in a very nasty rupture - doesn't happen? What is 'least expected'? I guess a muddle-through resolution to the crisis that gives way to some other source of anxiety (a comeback for global warming would be a welcome relief...)

Robin Hanson is channelling Disraeli in a recent post on Eventual Futures. He notes that many recommendations for action in the present are based upon the idea that something must 'eventually' happen. Extrapolation as anticipation. As he puts it:


The common pattern: project forward a current trend to an extreme, while assuming other things don’t change much, and then recommend an action which might make sense if this extreme change were to happen all at once soon.

Having blogged before about the potential for the ePunt, I didn't see this one coming - the return of the old Punt!


While it is no longer legal tender, notes and coins can still be exchanged for euro at the Central Bank in Dublin. But, for the past two months, shoppers in the Monaghan border town of Clones can dispose of the former currency in local shops. Some 42 shops in the town, including SuperValu, are accepting it as payment for shopping.

Via The Irish Examiner
Posted by Gerard O'Neill at Wednesday, May 16, 2012 No comments:

My company has just made available three years' worth of Irish consumer sentiment data going back to May 2009.

We have developed the data visualization interface using the Tableau software, in partnership with Data Analytics. You can read more about it here - details on how to get the full data set (and the free Tableau Reader for viewing offline) also included.

It's a handy of way of seeing how the recession has affected the mood (and pockets) of different segments of the Irish population over the past three years.

The Flavour of Favours 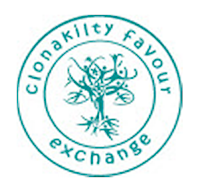 Work has put the kibosh on blogging lately, but I thought I really must plug the Clonakilty Favour Exchange. It's a great example of a local Irish community 'opting out' of the euro system and all the constraints it imposes locally and nationally. I was on holiday in Clonakilty last summer - there's a great energy and enthusiasm about the town that I'm sure has helped with the launch of the exchange.

Like I've said before, money is too important to be left to the European Central Bank (or any Central Bank, come to think of it).