Another measure of how far we have 'fallen': today's Quarterly National Household Survey from the CSO shows that we're right back to 1998 levels when it comes to the working share of the population. I've used the latest results to calculate the number of people in jobs as a percentage of the total population over the age of 15 - see chart below.

That's not good for consumer spending, income taxes or most anything really.

It's going to be a slow recovery... 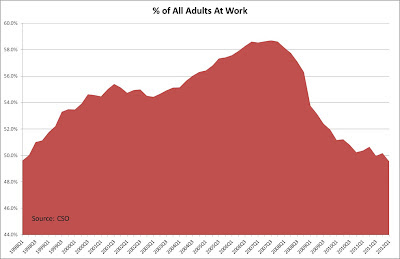