And it's getting 'blisser'. Interest in science in Ireland is declining, and is already well below the EU average. That's according to today's Eurobarometer report on 'Robots': 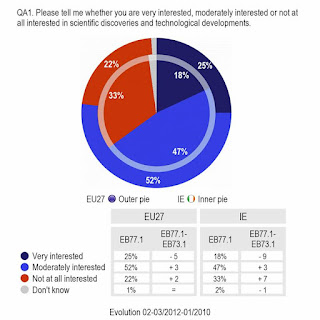 Indeed, we can lay claim to the 'bronze medal' for scientific ignorance in Europe: we come third (after Portugal, then Malta) for the percentage of the population who are 'not at all interested' in science. And what's really worrying is that older Irish teenagers show about half the level of interest in science as their EU counterparts.

And no, it's not down to religious education...