Why do we fetishize entrepreneurship? I've nothing against people setting up their own businesses - it is one of the hallmarks of a free society after all - but I don't see it as the 'great white hope' for economic recovery in Ireland. And yet, if you just read the press release about the GEM 2011 study on entrepreneurship in Ireland, you would think Irish entrepreneurs are about to unleash another boom on an unsuspecting nation. I don't think so. A look at the actual figures in the report shows that there are as many business people discontinuing established businesses as starting up new ones: 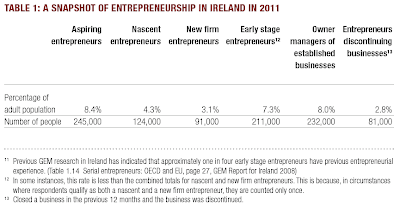 The findings are based on a nationwide survey, by the way, so don't be fooled by those percentages to one decimal place: the margins of error are such that there is effectively no difference between the number of new firm entrepreneurs and those discontinuing existing businesses. The latter could even be higher...

I've been involved in a few start ups in my time, some have succeeded, more have failed. That's normal, I've got over it. But as I've observed before, entrepreneurs aren't heros - most of them are simply trying to survive and setting up their own business is often a sign they've run out of options. Not their first choice. Even the GEM report admits that:

The majority of entrepreneurs are setting up new businesses that are in low technology sectors, are not particularly innovative, have little or no aspiration for growth, and focus on the local or domestic market.

So not quite the next Google or Apple...

We're not alone in our obsession with entrepreneurs. The RSA in the UK recently published a somewhat giddy report on Generation Enterprise, explaining how young people were building a brave new economy on what it calls 'self-generated value' (SGV). All those new apps for iPhones and Facebook will sweep away the rust belt of failing industries and unleash hope for a brighter economic future. Yes, it's written in exactly that kind of breathless hyperbole. Very enjoyable... and very juvenile.

Entrepreneurship will play a key part in our collective economic future, but it will be the entrepreneurship of 'System D'. That's the name for the shadow or informal economy that grows up through the cracks of a post-bubble age of excess (or failed state). And in fairness to the RSA, they have published another report recently on how to more effectively tap the growth potential of the informal economy. It's a somewhat more sensible - and useful - read than the other report.

So my advice to anyone who wants to start up their own business in Ireland - and hasn't done so before - is: if you really have no other option to secure the financial well-being of your family then go ahead. And good luck...