This Is Going To Take A While

Another reason why this recession is different: men are leaving the workforce like never before. In the United States the labour force participation rate is the lowest on record, as the chart below shows: 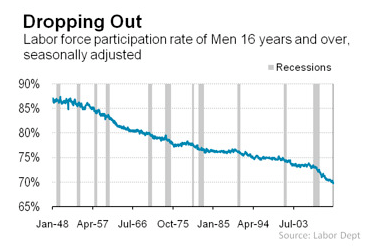 We have a similar situation in Ireland, especially for 20-24 year old men as the next chart shows: 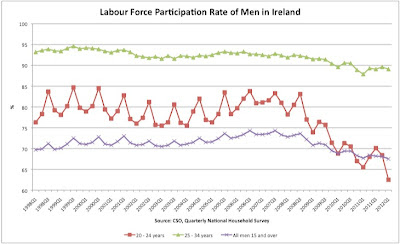 This also means that the recovery will be different: there mightn't be one. At least not any time soon. Again in the United States there has been a significant jump in the percentage of Americans who consider themselves to belong to the lower or lower middle classes. The biggest jumps have been for men and for 18-29 year olds. On every indicator those who self identify as belonging to the lower classes are experiencing more hardship, face greater financial difficulties and are less optimistic about the future. I suspect something similar is happening to Irish youth, especially young men, as well.

Why does it matter for our recovery prospects? Simply put, men want jobs while women want the option of jobs. A recent Gallup survey illustrates the point: twice as many women as men would prefer - if they were free to do so - 'to stay at home and take care of the house and family', including 40% of women in employment: 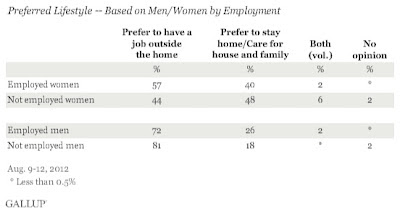 Such a freely chosen option for women - especially those with young children - simply won't be available with men increasingly excluded from the workforce: already, there are 126 women for every 100 men in Irish universities and the ratio is getting worse.

Without men getting the jobs, earning the incomes and paying the taxes that will signal real economic growth then the recovery will be anaemic at best. Or postponed indefinitely.