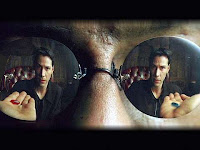 "You take the blue pill, the story ends, you wake up in your bed and believe whatever you want to believe. You take the red pill, you stay in Wonderland, and I show you how deep the rabbit hole goes". Morpheus

For fans of The Matrix (I'm one), this from Christopher Cole:


If financial markets are the mirror reflecting a vision of our economy third dimension markets measure the distortion in the reflection. If you are familiar with Plato’s Allegory of the Cave volatility is best understood as our collective trust in the shadows on the wall. In the 1985 work “Simulacra and Simulation” French philosopher Jean Baudrillard recalls the Borges fable about the cartographers of a great Empire who drew a map of its territories so detailed it was as vast as the Empire itself. According to Baudrillard as the actual Empire collapses the inhabitants begin to live their lives within the abstraction believing the map to be real (his work inspired the classic film "The Matrix" and the book is prominently displayed in one scene). The map is accepted as truth and people ignorantly live within a mechanism of their own design and the reality of the Empire is forgotten. This fable is a fitting allegory for our modern financial markets.

Or as FT Alphaville put it:


To get all Matrix on this, it’s like saying the market has a clear-cut choice to make. It can either continue to take the blue pill and fool itself into thinking everything is as it always was — despite the glitch in the Matrix that was 2008 — or dare to see the economic reality for what it is by taking the red pill.

Naturally, the risk associated with taking the red pill is impossible to quantify — it could, after all, compromise our very understanding of economic reality.

It’s understandable, in that context, that dishing out the blue pill seems so much more palatable to so many.

As for Ireland - by opting out of the European financial transaction tax yesterday did we simply decide to pop another blue pill?