Gallup's latest poll of European sentiment once again begs the question: what kind of recession are we having in Ireland? The table below shows that a minority of Irish people are indeed 'suffering' at the moment, though not as many as are suffering in... Germany. Or the UK or France for that matter: 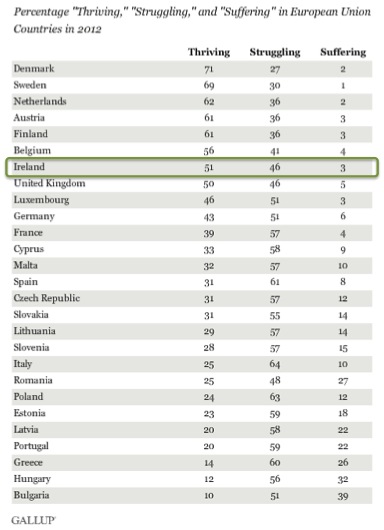 Indeed, just over half the population in Ireland are thriving, albeit down from 72% in 2008. Back then we had the third highest percentage of people thriving in Europe, but since we've fallen all the way down to... seventh highest.

We're a long way from the levels of misery in Spain, Italy, Greece and Portugal. For now.
Posted by Gerard O'Neill at Monday, October 15, 2012