What will your pension be worth when you retire? It's a question a lot of people are going to be asking themselves in the years and decades ahead. The short answer is: 'it depends'. Here are just a few things you'll have to consider:

1. Prospects for global economic growth (as one of the world's most open economies, our fortunes - and pension funds - are very much tied to everyone else's).

2. Future tax rates: there could will be a (very) big difference between the income your pension provides and what you actually receive, thanks to taxation.

3. Your contributions: an obvious one, but forecasting future contributions requires you to forecast future (after tax) income as well as the tax treatment of pension contributions (in the next Budget and every other Budget after that).

4. Pension fund levy: due to run for another two years, and - like all taxes - it'll keep on running and most likely, get bigger.

Oddly enough, none of the 'pension calculators' you can find on the web sites of pension providers invite you to answer these questions. Wisely perhaps: because the truth is nobody can answer them. However, kudos to the OECD for recently having a go at answering 1 above. They've produce a study on global growth prospects for the next fifty years. They reckon Ireland can look forward to annual growth of less than 2% per annum to 2060. Add in another couple of percent for inflation and 3-4% looks like the most optimistic assumption for pension fund growth in the long term: 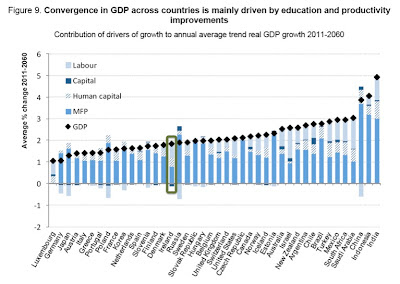 But the report itself is full of heroic assumptions (necessary, of course, to say anything about the world in fifty years' time). However, the question I always ask of such long-term projections is: how likely would you have been to describe the world we live in today starting out fifty years' ago, say in 1960? And that's the problem with long-term forecasting - including pension forecasts. The boundaries of uncertainty increase exponentially the further out we seek to forecast.

Add to the mix the accumulating burden of unfunded public sector pension liabilities and the assumptions you'll have to make about future tax levels will likely need to be on the very high side. Here's Colm McCarthy on the pension ponzi scheme now strangling the country:


Defined-benefit schemes are strewn with temptation. The biggest temptations are to make unrealistic assumptions about investment returns and to negotiate fancy benefits unsupported by adequate contributions. Because the schemes are meant to last forever and will typically have enough cash to meet current payments to retirees, they can turn into Ponzi schemes where current contributions are eaten up, making these payments and the schemes become insolvent. Private companies competing in today's markets are not credible guarantors of long-term pension-fund liabilities. The defined-benefit model is broken and the individualisation of pension savings is the unavoidable alternative.

In the public service, no funds are invested and the collective obligation falls on future generations of taxpayers, rather than on the unretired employees.

The Reality Gap is going to get bigger before a new generation of politicians emerges who are prepared to close the gap. Though we don't have the luxury of waiting a generation to close it.