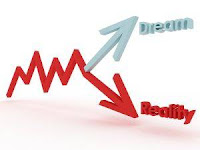 The Financial Services Authority (FSA) in the UK has just announced that the future is on hold. Or at least postponed. The reason? From next year, pension projections have to be based on a more pessimistic view of the future:


The Financial Services Authority has confirmed that it will reduce the standard projection rates used to indicate investment returns and the impact of charges on these savings plans. Currently a pension statement will show the current value of your fund, and what it will be worth at your retirement date if it grows by 5pc, 7pc and 9pc a year. These figures are being reduced to 2pc, 5pc and 8pc after concerns that the current projection rates gave an unrealistic view of the potential investment growth.

The ongoing impact from the financial crisis has forced a rethink on growth prospects for pension funds and the wider economy. But they still expect things to get to normal, eventually. As explained in a background paper that informed the change to projection rates.

This is hugely important from an Irish perspective, not least because of the enormous overlap between the financial industries (including pensions) in both Ireland and the UK. We can expect similar changes to projections rates for Irish pensions, which is seriously bad news for the 70% of defined benefit pension schemes that are in deficit (to the tune of €10 billion in the biggest schemes alone, according to LCP Ireland). Lower projections means bigger contributions, or you'll be breaking the law as operated by The Pensions Board.

The problem, in a nutshell, is growth. Everything from Troika bailouts to the pensions of Cabinet Ministers is predicated on economic growth. Moreover, on growth rates closer to the FSA's old standards than to their new standards. But isn't going to happen. The realities of a balance sheet recession of epic proportions (especially in Ireland) combined with the prospects of very low growth rates over the long term, means that even the gold plated pensions of our public servants will prove unsustainable.

The reality gap - between what we want and what we get - will only get bigger. Expect more announcements from the FSA and others in the years ahead.
Posted by Gerard O'Neill at Sunday, November 04, 2012