My company has just released some research on the ambitions and goals of Ireland's under 25s. And it's quite reassuring really.

The majority of under 25s expect to have started their career by the time they're 25, and to have bought a car. Their parents will be relieved to know most expect to have moved out by then as well...

So the future of family life looks fairly secure for another generation. Assuming they haven't emigrated (1 in 3 by the time they're 35): 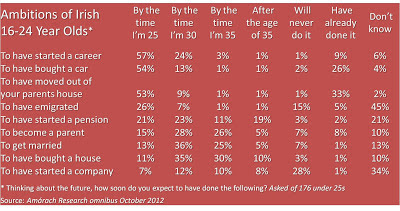