Lightly Along the Ledge 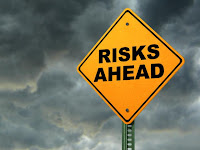 Like the proverbial bus, long awaited, I received not one but three different reports this week on the theme of risk and the challenges ahead. The first is the WEF's annual Global Risks report. It looks ahead to the likelihood of various risks manifesting themselves, and their impact should they happen.

The report provides a handy chart showing the consensus view on each risk across economic, environmental, geopolitical, social and technological categories: 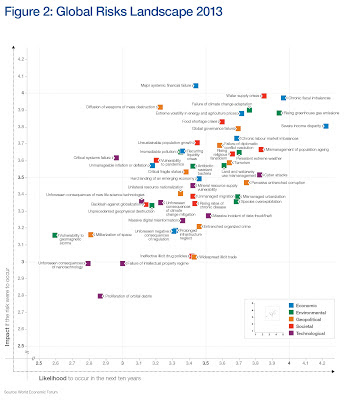 The worrying thing - for the risk averse among us - is that WEF see the majority of these risks becoming more likely (and more impactful), rather than less, versus their views in 2012.

However, they have a very handy special report on how nations can build resilience to global risks across the five components of resilience, namely: robustness, redundancy and resourcefulness, as well as response and recovery. WEF have even produced a measure of Risk Management Effectiveness Score for 139 countries in 2013. Ireland ranks number 65 in the world in terms of our risk preparedness - not quite as good as Ethiopia but better than Burkina Faso. I think we need to do a bit more work on our national resilience...

The good news is that 'we' (i.e.: humanity) is getting better at anticipating risks - especially disasters. That's according to the second of our three reports, from the UK's excellent Foresight organisation. Simply called Reducing the Risk of Potential Disasters, the study contains the reassuring news that our ability to predict various disasters will likely improve in the future, though not uniformly as illustrated below: 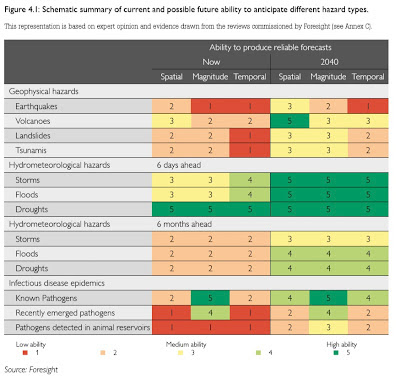 But the story is less positive for 'man made' disasters, especially of the social and economic kind. Which brings us to the third report, Tullet Prebon's Perfect Storm: Energy, Finance and the End of Growth. It's a  cheery little essay alright. Unlike the first two reports, Perfect Storm assumes that the biggest risks are already 'baked in' to the future. It's a superbly well written report - and beautifully illustrated with photographs of the ruins of previous civilisations just to emphasise the message - and, it must be said, a pretty convincing thesis as well.

The author - Tim Morgan - identifies four key trends now shaping up to make the future very bumpy indeed. These are a global credit bubble, globalisation which enabled the bubble, mis-leading official statistics about growth and debt, and finally the end of cheap energy. The last one is crucial, according to Morgan we are entering the age of low EROEI, i.e.: energy return on energy invested:

There is also a crucial connection between money and energy:


The appreciation of the true nature of money as a tokenisation of energy also enables us to put debt into its proper context. Fundamentally, debt can be defined as ‘a claim on future money’. However, since we have seen that money is a tokenisation of energy, it becomes apparent that debt really amounts to ‘a claim on future energy’. Our ability, or otherwise, to meet existing debt commitments depends upon whether the real (energy) economy of the future will be big enough to make this possible.

Therefore, the viability (or otherwise) of today’s massively-indebted economies depends upon the outlook for energy supply. If one chooses to believe that the exponential expansion in energy use that has powered the growth of the economy (and the global population) since the dawn of the industrial age can continue into the future, debts may be serviceable and repayable out of the economic (for which read ‘energy’) enlargement of the future. If such enlargement cannot be relied upon, however, then the debt burden can only be regarded as unsustainable.

All the more reason, perhaps, why we need to get working on our national resilience.