The Facts of Tax

I snapped this at my local petrol station: 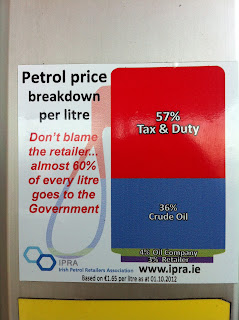 I think it's interesting that a business has taken to educating its customers about the facts of tax. Tax has replaced sex as the taboo subject in Ireland, i.e.: something everybody knows about but are embarrassed to discuss in public.

David Quinn recently pointed out that the Irish media are obsessed with spending cuts and practically indifferent to tax increases:


For example, the big controversy after last month's budget wasn't the property tax but the cut to the respite care grant.

In other words, it was ordained that what really concerned the average person wasn't the fact that they are about to be hit with a big new tax, but a cut to a particular item of spending. This reflects the view that public spending and tax increases are basically good things in themselves. As mentioned, Fine Gael in power is trying to resist increases to income tax. However, what we rarely hear from Fine Gael – or anyone else – is the moral case for lower taxes.

As a result of this near silence, what we hear incessantly instead is the moral case for public spending.

This case is easy to make; public spending helps the poor and the vulnerable, the sick and the elderly.

It allows us to educate our children. Any cut to public spending is therefore an attack on all these categories. Higher taxes allow us to help them even more.

The first argument against high taxes is obviously the pragmatic one that if you remove from people too much of what they earn you remove the incentive to get ahead and that harms the economy for everyone.

As a result of the focus on cuts rather than taxes, we have extraordinarily high levels of spending on social welfare and health that are somehow taken as inevitable. But as Donal DeBuitleir recently illustrated, we have one of the youngest, healthiest populations in Europe and yet our spending on health services relative to GNP is easily the highest in the EU. Something's not quite right...

Perhaps when the bill for the property tax lands on the nation's doormats we'll see more debate about the facts of tax - though I don't expect any of our politicians to lead the discussion.