"The simplest way to explain the behavior of any bureaucratic organization is to assume that it is controlled by a cabal of its enemies." Robert Conquest's Third Law of Politics

People are beginning to notice. Take a recent poll on people's values in the UK. Asked what they see as the most important values in the personal lives and communities, the most common value is 'family' (alongside 'caring'). But asked in the same poll which value appears to be most common in the nation as a whole, the answer is 'bureaucracy' (by a long shot):

I have to admit I was surprised. Bureaucracy is hardly popular, but it rarely grabs the headlines either. Still, something is going on, and it isn't just the Brits who are feeling uncomfortable with 'Big Bureau'. In the United States, a majority of American citizens (for the first time ever) feel that the Federal Government threatens their personal rights and freedoms. That includes 4 in 10 Democrats, by the way.

I don't think we're there yet in Ireland. A recent visitor from America remarked to me that he had been in Dublin three days and hadn't seen 'a cop'. So we're not quite a police state yet... But the issue of bureaucracy is about something more big government. It's about a world increasingly shaped by a left-brain dominant culture, as described by Iain McGilchrist in a recent RSA paper:

All these are features of the way the left hemisphere conceives the world, not the way the whole brain would have seen it... I could point to the mass of petty legislation, and the obsession with accountability and audit in all walks of life, designed to fill the vacuum left by trustworthiness and merely serving further to erode trust; a litigious culture, which imposes a heavy burden on the economy and saps morale; the bureaucracy and micromanagement that stifles originality in research and ensures mediocrity; the narrow-minded obsession with economic gain here and now that attacks educational institutions and the world of scholarship; the managerial culture that is destroying professionalism in medicine, and substituting machine-like ‘decision trees’ for skill and judgment; the neglect of practical hands-on, embodied experience and common sense, that turns nurses and policemen into office-based paper pushers with degrees; the exploitation of the natural world as if it were just so much resource to ‘go get’; and so on.

The left hemisphere focuses on detail at the expense of the bigger picture, and on procedures at the expense of their meaning. This loss of proportion and preference for the forms of things over any real world content, lend themselves to a ‘tick box’ mentality, which is also an aspect of its risk-averse nature. Since its purpose is control in the service of grasp or manipulation, rather than understanding of the world, it is anxious and even paranoid if it senses loss of control. This makes it prone to bureaucracy, and indeed one could see the bureaucratic mind as an epitome of the left hemisphere’s take on the world, prioritising not just control but procedures that are explicit and that favour abstraction, anonymity, organisability and predictability over what is individual, unique, embodied and flexible. In the process justice gets re-interpreted simply as equality.

What we're seeing in the UK and USA are belated manifestations of a revolt against the bureaucratic world-view, the box ticking, form filling and micro-management.

Will we avoid a similar fate in Ireland? It's probably too late (too many new taxes, charges and levies to administer after all). Though 'peak welfare' is but a precursor to 'peak government', we know from the history of the Roman Empire that bureaucracies change but slowly, and very, very reluctantly.
Posted by Gerard O'Neill at Wednesday, February 27, 2013 1 comment:

The fallout from the Mangan Report on child benefit reform (i.e.: our politicians running for cover and putting everything on the long finger), is a reminder of just how difficult it will be for modern democracies to navigate 'Peak Welfare' in the years (or months) ahead.

As ever, the Archdruid Report provides a salutory reminder as to the bigger forces driving the need for reform, and not just in Ireland:

It’s far more important, it seems to me, to recognize that the welfare states of the late 20th century were the product of a vast but temporary abundance of energy and the products of energy; they did not exist before that glut of energy arrived, and it’s thus a safe bet that they won’t exist after the glut is gone.

I think it’s at least as safe a bet, mind you, that nobody in America will be willing to face that fact until long after the abundance of the recent past is a fading memory...

In the time of limits ahead of us, no country on earth will be able to afford a welfare state of the kind that was common in industrial societies over the last century or so. That’s one of the harsh realities of our predicament.  National economies powered by diffuse renewable energy sources, bound by strict ecological limits, and forced to cope with the cascading instabilities of a damaged planetary biosphere, simply won’t be able to produce the surplus wealth needed to make that a possibility. Methods of providing for urgent social needs that worked in the days before the economy of abundance are another matter, and for this reason it makes sense to suggest a revival of the old American custom of forming voluntary associations to fund and manage public amenities.

We have our own voluntary associations here in Ireland, especially what I call the '3Cs': the church, the Credit Unions and Cumann Lúthchleas Gael. They may not know it, but they're going to play a much bigger role in Irish society in the times ahead. Alongside existing and new associations and societies that will rediscover the best of voluntarism and co-operation.

The future's going to be a lot more local, and a lot more personal. And who knows, maybe a lot better for it as well.

Posted by Gerard O'Neill at Thursday, February 21, 2013 No comments:

The future as a periodic table - a clever idea from Richard Watson: 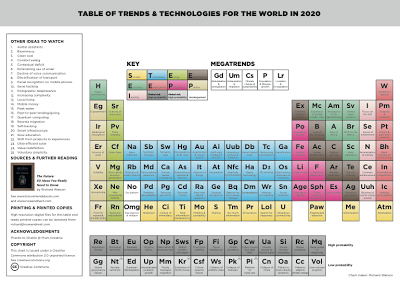 A very big hat tip to the RSA for their latest report Divided Brain, Divided World.

It's co-authored with Iain McGilchrist whose book - The Master & His Emissary - is reckoned by many (including me) to be one of the most original and insightful works of non-fiction in the past ten years.

There have been over a million views of the RSA's animation about the book, which gives you some indication of its appeal.

I'm too busy for proper blogging, unfortunately, but here's an interesting observation from Brendan O'Neill in light of the UK Parliament's recent vote in favour of same sex marriage. Or what the vote's really about:

What we are witnessing is a process of elite reformulation around the issue of gay marriage, the cultivation of a new, off-the-peg moral stance for a political and media class thrown by the demise of traditional morality in recent years. And the fact that the public is defiantly unmoved by this new morality, by gay marriage? That’s all the better, for it allows these suits in officialdom and the finance world to rebrand themselves as brave, too, fighting for a cause all on their own against the shoulder-shrugging of the dumb, probably prejudiced public.

Quote of the day from the always quotable Bill Gross (fretting about the Credit Supernova):


Each additional dollar of credit seems to create less and less heat. In the 1980s, it took four dollars of new credit to generate $1 of real GDP. Over the last decade, it has taken $10, and since 2006, $20 to produce the same result. Minsky’s Ponzi finance at the 2013 stage goes more and more to creditors and market speculators and less and less to the real economy. This “Credit New Normal” is entropic much like the physical universe and the “heat” or real growth that new credit now generates becomes less and less each year: 2% real growth now instead of an historical 3.5% over the past 50 years; likely even less as the future unfolds.