The Canary is Dead 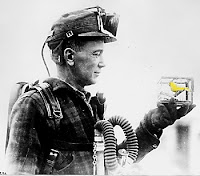 The income tax was introduced as a temporary, emergency measure during America's Civil War. It isn't over yet, apparently. Now we are being assured that the theft of Cypriot savings announced on Friday is a one off, never-to-be-repeated measure. Yeah right.

The raid on Irish pension funds last year, followed by the raid on Cypriot savings accounts this weekend, tells us that there is poison in the European air and it isn't just the canaries who are in trouble.

As Charles Wyplosz calls it over at VoxEU:


All the ingredients of a self-fulfilling crisis are now in place:

It will be individually rational to withdraw deposits from local banks to avoid the remote probability of a confiscatory tax.

As depositors learn what others do and proceed to withdraw funds, a bank run will occur.

The banking system will collapse, requiring a Cyprus-style programme that will tax whatever is left in deposits, thus justifying the withdrawals.

This would probably be the end of the euro.

Let's hope nobody strikes a match...