It's alway sad when a blogger you follow regularly hangs up the keyboard. It's especially sad when it's one of the very few blogs that has provided a unique and insightful commentary on what's really going on in our benighted country. Hence the sad news that Nama Wine Lake has published its final blogpost today.

The contents of the site will remain online, and will undoubtedly provided a valuable resource to future historians trying to explain how things went so horribly wrong in Ireland. Here's hoping, of course, that they'll talk of such things in the past tense. 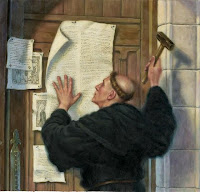 I was speaking last week at The State of Europe Forum in Dublin. My job was to respond to a number of contributions from Christian economists from an Irish perspective.

As I was listening to talks by Tomas Sedlacek and Michael Schluter it struck me that the time might be right for a second Reformation in Europe. After all, the first Reformation (dated to Martin Luther's famous nailing of his 95 theses to the door of Wittenburg church) was brought on by a European-wide economic crisis. Too much money was being transferred from the hard-working Germans in the north to the feckless Italians in the south. Sounds familiar (though admittedly we can see what was paid for by all those papal indulgences; pity the same can't be said for the bailouts funded by the Troika).

As the 500th anniversary of Luther's famous protest approaches in October 2017, perhaps a Second Reformation will arrive in time to change the course of European history, just like the first one. With our politicians, intellectuals and business leaders now bereft of any ambition other than simply surviving, the next Martin Luther will undoubtedly be one who challenges the prevailing orthodoxy - and hypocrisy - like the first, and who calls on Europeans to aspire to a nobler spirit. One that is practically Christian, even if it isn't practicing Christian. One not so much guided by the invisible hand as by the visible heart. And who knows, he might even be a Catholic.

Funnily enough, Luther's theses are perfect for twitter. Perhaps it will be the 95 tweets that starts the Second Reformation...?

Strange times when I find myself agreeing with a Marxist:


Finance is to our stagnant societies what the space race and the Cold War were to the Eastern Bloc countries of the 1970s and 80s – a huge cost that the state imposes on its public, with the result that cities and economies start to become tedious processions of the same. Will Davies

... is nearly over, according to Tullet Prebon:


The uneasy economic calm that has prevailed since the 2008 banking crisis is analogous to the “phoney war” of 1939-40. Like that military event, this economic one will end with a bang.

Behind governments’ routine assurances to the contrary, the reality is that the world is ex-growth, governments and economies are indebted far beyond sustainable levels, the banking system remains extraordinarily vulnerable to the next shock, and strong rallies in global bond markets are bubbles waiting for a pin.

Fundamentally, the problem is that the monetary economy has grown far beyond a scale sustainable by the underlying ‘real’ economy of energy and broader resources. The energy returns equation critical to growth in the real economy is weakening relentlessly, meaning that output is not capable of meeting the future claims embodied in the monetary system.

No-one in authority has any real idea about how to bridge the gap between the two in any way short of value-destruction on a systemic scale. Moreover, Western governments have entered into welfare spending commitments which cannot conceivably be met in the absence of robust growth.

In the absence of solutions, governments are prioritising the defence of the status quo in general, and of their own interests in particular. We are witnessing the early but unmistakable stages of an expropriation process designed to transfer private wealth to the state.

It's all alarmist nonsense, of course, sure no Irish government would ever agree to confiscate people's savings... 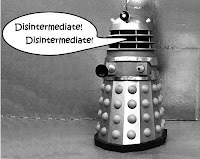 The quote is from Friedman's op ed in today's Irish Times.  He thinks the solution to the developed world's worsening jobs crisis is better education to ensure a match between skills and jobs. But in the age of the Amazon Mechanical Turk that simply won't be enough.

The crisis is twofold: first we have The Great Decoupling whereby GDP appears to be getting bigger, 'thanks' in the main part to financial bubbles; but employment itself stagnates - due to innovation and automation rendering the skills of even the best qualified increasingly redundant.  The second part of the crisis is youth unemployment: never in history has the developed world (and Ireland, for that matter) had more, better qualified graduates entering the workforce and yet the number of young people out of work globally is almost equal to the population of the United States. And rising.

Here in Ireland the ratio of the adult population in work (i.e.: numbers in jobs divided by the total adult population) is back to (or below) levels last seen in the 1990s: 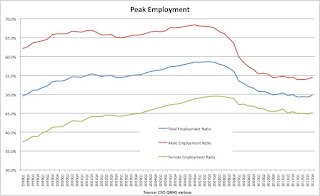 Meanwhile, Ireland's GDP is growing again - suggesting we have our own 'decoupling' under way.

Will a eurozone recovery reverse the trend? It might (though how you get the eurozone to recover is another issue). But I suspect we are witnessing a more profound change in our fortunes, one in which The Religion of Progress goes the way of most religions in the West - though probably with a lot more fuss. If the 'four horsemen' of progress (financialization, energy shortages, demographic winter and men opting out) don't turn back then it's hard to see how things will get better, never mind stop getting worse.

Still, I am a hopeful pessimist (to borrow Iain McGilchrist's self-description), and I think here in Ireland we will be forced to try a number of different things (from virtual currencies to 21st century monasteries) rather than wait for Brussels or Frankfurt to put their house in order. Whether an ageing cohort of political leaders have the vision, never mind the desire to really tackle the unprecedented challenges faced by our young people remains to be seen.