It's bad when even retired spooks think things are going too far:


"It’s capacity-driven. We have this enormous capacity to collect and sort data. We do this because we can, and because it’s the one area where the government can really overmatch its terrorist adversaries. What now seems extraordinary is soon accepted as normal, and becomes the baseline for the future. Over a period of time, this baseline shifts, and these new intrusions accumulate and reinforce one another—and that fundamentally changes things. In the past, at the end of the emergency, the balance has shifted back and a lot of those powers were ended. But we’re in a situation now that doesn’t have a finite ending. If there isn’t an end, then these powers accumulate and accumulate and accumulate. This is a fundamental difference. What we put in place becomes a permanent part of the landscape." Brian Jenkins

A recent report from the UK's Defence Academy (part of the Ministry of Defence) on The Global Cyber Game - which came out before the recent debacle - provides a brilliant analysis of what's going on (they do ask permission to install cookies on your computer, by the way :-). They explore the bigger picture of our new, post-Westphalian age of international diplomacy and declining national sovereignty, using the analogy of a cyber power board game to explore trends and scenarios. The chart below shows the board, and the various areas of co-operation and conflict now playing out: 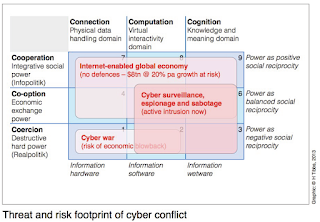 The Military-Digital Complex (my play on Eisenhower's Military-Industrial Complex) represents that interface between commercial co-operation/competition and plain old coercion/co-option.  Their scenarios for how things evolve from here are sobering. We've been living through the 'free lunch' phase of the digital economy, and are now in the 'rising alarm' phase (in case you hadn't noticed): 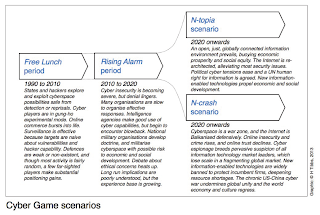 After that, things will get better... or they will get worse. How much better (and how very much worse) is set out in the MOD's report.

I'm inclined to see things getting worse. And not because I'm a techo-luddite (far from it), but mainly because I've been reading Oswald Spengler's remarkably prescient Decline of the West. Written precisely one hundred years ago.