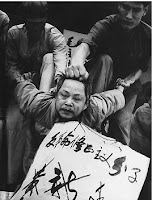 Even some on the Left are worried about the tone of the same sex marriage debate - it's all starting to smack of the Cultural Revolution:


Reasonable people can disagree on the substantive question of whether marriage law should include gay and lesbian couples. But our Cultural Revolutionaries don’t see any reasonable opponents. Instead of recognising that this is a complicated and relatively new issue, with various constituencies having legitimate concerns and the public essentially divided, the gay marriage campaigners tell us it is all very simple – either you jump on the train of history, or you’re a bigot.

I might just order a copy of The Little Red Book on Amazon, just in case...