The Economics of Sunshine

It's not often you see this in Ireland: 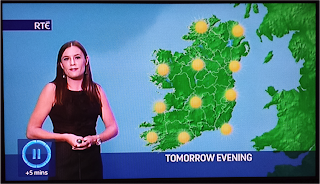 I was so surprised by the weather forecast on RTE the other evening that I hit the pause button and took a photograph. One for the grandchildren perhaps...

Funny enough, it seems that there is a causal relationship between the sun and the economy. And not just for ice cream sales. According to John Hampson there is a historic association between solar cycles and financial/economic cycles. The influence of the 11-year solar cycle (measured in sunspots) on the Earth's geomagnetism drives patterns of change in commodities, stocks and other economic indicators on a fairly predictable basis going back to the 19th century (since data hasn't been available for much longer).

Unfortunately, despite the good weather we're enjoying right now, we've just reached the solar maximum as part of the latest solar cycle. Odder still, solar maximum 24 (the one now ending) has been the weakest in 100 years, and nobody knows why. It might explain the rather flaccid nature of America's economic recovery since 2008 come to think of it.

The last time there was such a weak solar maximum we had the Maunder Minimum which coincided with the Little Ice Age.

Hmmm, I think I'll have a cold beer after that...