Did the Spreadsheet Kill Capitalism? 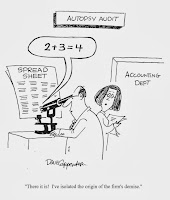 Clay Christensen seems to think so, or if it hasn't killed capitalism then it might have accidentally hastened its demise. His recent talk at the RSA on The Capitalist's Dilemma is magnificent. All the more so since he disarmingly mentions at the beginning of his talk that he suffered a stroke just a few years ago and had to learn how to speak again with the help of his wife and therapist. The fact that he then proceeds to deliver an enthralling, fascinating and deeply original talk on why innovation isn't working any more is testimony indeed to his recovery.

Christensen has written extensively about innovation before, and delineates three types of innovation:


Empowering innovations create jobs, because they require more and more people who can build, distribute, sell and service these products. Empowering investments also use capital — to expand capacity and to finance receivables and inventory.

The second type are “sustaining” innovations. These replace old products with new models. For example, the Toyota Prius hybrid is a marvelous product. But it’s not as if every time Toyota sells a Prius, the same customer also buys a Camry. There is a zero-sum aspect to sustaining innovations: They replace yesterday’s products with today’s products and create few jobs. They keep our economy vibrant — and, in dollars, they account for the most innovation. But they have a neutral effect on economic activity and on capital.

The third type are “efficiency” innovations. These reduce the cost of making and distributing existing products and services. Examples are minimills in steel and Geico in online insurance underwriting. Taken together in an industry, such innovations almost always reduce the net number of jobs, because they streamline processes.

But here's the crucial thing:


Efficiency innovations also emancipate capital. Without them, much of an economy’s capital is held captive on balance sheets, with no way to redeploy it as fuel for new, empowering innovations. For example, Toyota’s just-in-time production system is an efficiency innovation, letting manufacturers operate with much less capital invested in inventory.

The problem as Christensen sees it is that the financialisation of the global economy (with 'money making money' taking over from 'money making stuff') has replaced the virtuous cycle of empowering-sustaining-efficiency innovations with a straight line of efficiency-efficiency-efficiency innovations that throw off more capital to boost corporate balance sheets, while eroding the employment creating capacity of the economy. It's what happens when spreadsheets take over and the job of management simply becomes one of managing numbers and ratios, not real flesh and blood businesses that create wealth and jobs. Hence balance sheets have never been healthier, the share of profits has never been higher, and the capacity for job creation has never been weaker...

Christensen's really intriguing insight is that the old capitalist assumption that capital is scare (hence the need for spreadsheets to manage its allocation) is simply not true any more, but businesses, investors and even governments act as if it still is. In fact, we live in a world awash in a glut of capital - QE, fiat currencies and all that - and yet small businesses can't get loans from banks because the payback period for real, empowering innovations is too long and too uncertain for spreadsheet obsessed financial analysts.

The problem for Ireland is that our 'innovation agenda' is focused on sustaining/efficiency innovations which have a net negative impact on employment, other things being equal. And we are well and truly in the grip of the spreadsheets, in both the private and the public sectors.

But there may be a bigger problem. Christensen assumes there are more empowering innovations out there. And maybe he's right - 3D printing is certainly one to watch. But what if he's wrong? Robert Gordon thinks we're past the peak of really impactful innovation, And John Kay has recently been channelling Peter Thiel: “We wanted flying cars, and they gave us 140 characters.”

The message to Irish entrepreneurs? First kill the spreadsheets...
Posted by Gerard O'Neill at Wednesday, September 25, 2013