One of the advantages of being a small, unimportant country like Ireland is that we don't have to make silly threats about invading other countries. Anyway, nobody would take us seriously even if we did. America's misfortune is that it has to see through its threats, otherwise nobody would take it seriously either.


My personal favourite, however, has long been his short essay ‘Shooting an Elephant’, which is an account of an incident in his time as an imperial policeman in Burma in the 1930s. I always ask my insurgency class to read it–not that Orwell mentions ‘counterinsurgency’ directly but it tells us much about that subject. As Orwell puts it, ‘One day something happened which in a roundabout way was enlightening. It was a tiny incident in itself, but it gave me a better glimpse than I had had before of the real nature of imperialism—the real motives for which despotic governments act.’

Orwell's short essay is at the end of David's post - do read the whole thing.

Syria is the white man's burden all over again, only the Syrian 'elephant' has friends. A whole herd of them, in fact. 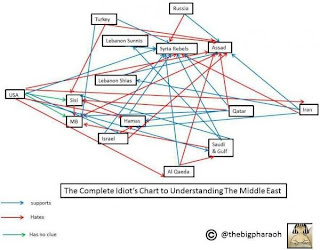