We Are All Ossis Now 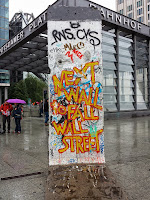 I took this photo yesterday in Potsdamer Platz. It's part of a memorial to the Berlin Wall at the site of the original East/West division. The graffiti caught my eye, and it struck me that we are all 'Ossis' now, the nickname given to former occupants of East Berlin and East Germany. Only the wall locking us in is one made of debt rather than concrete.

The (over)reaction to the Fed's on-again-off-again QE taper in the past week tells us that the bubble of all bubbles is upon us. Total public and private debt is now 30 percent higher as a share of GDP in the advanced economies than it was prior to Lehman Brother's collapsing. Guy Haselmann has looked ahead to what will happen when the debt wall falls (funny video at the end, btw):

Once tapering actually occurs, the discount re-adjustment equation will rise away from zero, making stock and bond valuations less attractive. Prices will ultimately have to be supported by their fundamental values, so a large price adjustment process will almost certainly occur. More importantly, a volatile over-shoot in equity and fixed income markets is likely, because investors will shift current positions from one of accepting the Fed’s ‘easy candy’ toward pricing in the Fed’s new final destination.

Doesn't sound like quite the same cause for celebration as the fall of Berlin's Wall in November 1989.