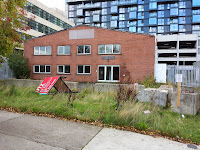 "Thus post-Roman cities in Europe’s most recent round of dark ages could salvage stone from  temples, forums, and coliseums to raise walls against barbarian raiders, just as survivors of the collapse of industrial society will likely thank whatever deities they happen to worship that we dug so much metal out of the belly of the earth and piled it up on the surface in easily accessible ruins."

The photos are from Sandyford Industrial Estate, which I passed through last week. The quote is from the always quotable Archdruid Report. I was struck by the volume of empty, near-derelict buildings (or unfinished ones in the case of surrounding tower blocks), in the midst of south county Dublin - one of the more affluent ends of the country. 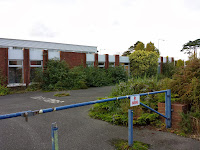 A lot of the empty buildings struck me as worth little more than their site value due to their age and condition.  Prospective owners might be better bulldozing them, salvaging what they can (though hopefully not to raise walls against barbarians). It might also mean that the reported increase in empty business properties is exaggerated,  since the figures include properties that may not be fit for occupation...

Sandyford tells us a lot about the shape of the recovery to come. It'll be a mix of shiny and successful alongside drab and failing, with the latter reminding the former that success is not guaranteed, and certainly not permanent. As the Roman slave whispered to every triumphant general: hominem te esse memento... memento mori! 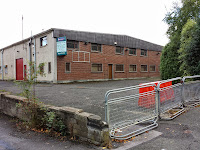 As one of Europe's more financially stretched economies, it's going to be a while before we will be sending in the bulldozers, never-mind building BER A1-grade accomodation on the newly leveled sites. The bigger issue is whether there'll be enough growth to justify doing anything with the sites. Walker Smith has penned a series of challenging articles on The New World of Less - more here and here. His concern is how businesses will create the wealth and jobs to generate recovery. Or rather, won't create, depending on how you view the future. He's not the only one concerned.

In America, the recovery appears to be bypassing the under 30s population.  We urgently need to avoid the same scenario in Ireland if economic recovery is going to mean more than work for bulldozers.