The OECD's new report on Adult Skills around the world makes for fascinating reading. For example, Tyler Cowen notes for the UK that:


England is the only country in the developed world where the generation approaching retirement is more literate and numerate than the youngest adults...

Another one caught my attention - the ubiquitous gap between men and women around the world when it comes to numeracy skills. Notes the OECD:

On average across countries, the mean score on the numeracy scale is higher for men than for women by about 13 score points – for all surveyed countries (Figure 3.4 [N]). The difference is statistically significant in all but two countries, Poland and the Slovak Republic. The largest differences are found in Germany (17 points), the Netherlands (17 points) and Flanders (Belgium) (16 points). 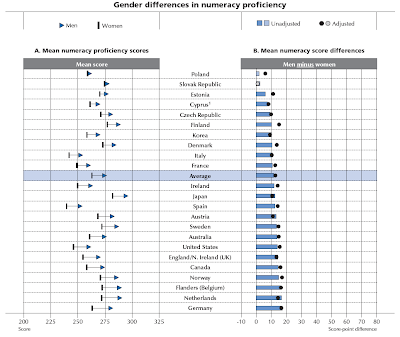 Obviously it's all a plot by the patriarchy and shouldn't be confused with, you know, actual real differences between the sexes. On the other hand, when it comes to literacy skills the picture is less stark:

It's a fascinating report, and at 466 pages it'll pay to revisit it from time to time.