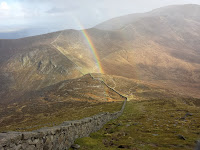 Back in the 1980s I worked on a project for BP looking at how to improve customer service across their network of petrol stations throughout the UK. The answer was simple, I explained, just figure out what your staff in Northern Ireland are doing and copy it! Sure enough, their customer satisfaction scores for their petrol stations in Northern Ireland, on every measure, were far ahead of those elsewhere in the UK. They didn't take me up on my suggestion, unfortunately...

My BP story came to mind reading a recent post on Slugger O'Toole about the revelation that six out of the ten happiest places in the UK are, in fact, in Northern Ireland. A revelation that was greeted elsewhere in the UK with the same non-plussed perplexity as that of my BP clients all those years ago. But having just spent a long weekend walking in the Mourne mountains (I took the photo on Sliabh Bearnagh yesterday) I can't say I'm all that surprised at the findings. Though I do admit to a possible bias on the matter...

Most Northerners (i.e.: the ones who don't feature in the news most evenings) are very friendly, helpful, open and genuinely interested in other people. That gets you a long way in the measurement of happiness stakes. Sure, the North still has its many problems (though not as existentially threatening as those facing the South); and history still looms large in terms of its political agenda (though more for the benefit of the politicians than the electorate, I suspect).

While the reaction to the happiness findings about Northern Ireland provoked the usual snark-fest of doubters and detractors (predictably of the 'sectarianism/religion/violence makes you happy' kind-of-thing), it seems most have missed the point. For starters, religion has less-and-less to do with conflict in the North: I doubt that many of the remaining protagonists could explain, for example, why St Patrick is associated with shamrock, let alone the nature of the Trinity (though in fairness, even Aquinas thought it beyond human reason to do so).

Instead, it seems to me that Northern Ireland is enjoying the social legacy of its (sometimes intense) Christian past, with rather more of the 'love thy neighbour' ethos to the fore than before - and more than in the rest of the UK for that matter. The legacy that Northern Ireland enjoys today is because of the social capital built up over generations by the God-fearing, Mass-going and Bible-reading believers of old.

Needless to say, that social capital is now being rapidly depleted - as it is throughout Western Europe - and perhaps the North simply has more to deplete than elsewhere, having arrived a little later at secular modernity. Whether Northern Ireland will continue to top the happiness charts for the UK in future seems to me mostly a function of how quickly its religio-social capital is depleted, assuming that the forces who might add to the capital are in retreat, just as they are south of the border.