I was part of a fascinating discussion last night about Ireland's agenda for its ageing population. There were lots of inspiring ideas and examples of how local communities - involving private and public partnerships - are making a real difference to the lives of older people.

But the underlying problem remains. It's the Ponzinomics at the heart of our pension provisions in Ireland (and in the West generally for that matter). The problem is growth - or rather, the lack of it. As I explained last night, in the absence of growth then pay-as-you-go welfare and pension systems, as well as defined benefit pension systems become Ponzi schemes, even if that was never the intention. The first in get the most, the last in get... nothing.

Charles Hugh-Smith has noted the same problem in the United States: not only do we not have enough growth, we don't have enough workers. I thought I'd check the situation in Ireland in terms of the numbers in jobs versus those retired from work. I created the chart below using the CSO's Quarterly National Household Survey data. It's not a pretty picture: 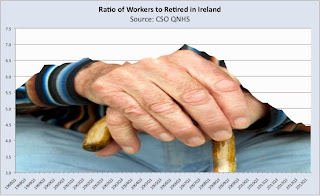 Back in Q1 1998 - when the QNHS started - there were 5.5 workers for every one person retired from work. That numbered soared to 7 workers per retiree in Q1 2007. Fast forward to Q1 2013 and the number is... 4.5 workers per retiree. Lower than the level fifteen years ago. The reason is obvious: the numbers in work have fallen back to their level in 2003, although they've picked up a little in the last quarter. The numbers retired from work, on the other hand, have risen inexorably without little interruption over the same period. And they don't look like falling any time soon.

A return to growth will, other things being equal, create jobs, thereby improving the ratio. Though probably not jobs for the unemployed - their prospects deteriorate as they get older and remain unemployed for longer, according to today's Central Bank analyses.

The solution appears 'simple' enough: raise the retirement age, raise (mandatory) pension contributions, and reduce the value of state pensions. Though politically it's a tad more complicated than that.

Nevertheless, if we have entered an era of low/no growth for the foreseeable future (and today's interest rate cut by the ECB is more-or-less an admission that things won't be getting better any time soon), we will have to rethink how we deal with an ageing population.

As I see it, we need to invest now in the 'soft capital' of networks, communities, societies, clubs, alternative currencies and public/voluntary partnerships that will prove resilient when the Ponzi scheme collapses - as all eventually do. Who knows, though we might be economically poorer in the future, we might also be emotionally, relationally and spiritually richer if we invest in the soft capital now to see us through the demise of financialized capital in the years ahead.