Nicholas Craft's presentation last week to the conference on Future Directions for the Irish Economy reminds us of some of the positive things shaping Ireland's future. Ireland has 'spare capacity' for growth, and with a fair wind (no eurozone implosion and improving trade prospects) we might enjoy a higher rate of growth than the rest of Europe over the rest of the decade.

Oddly missing from his analysis - and most of the other presentations that I've read - was any reference to the role of debt in Ireland's future. The Economist talks about Ireland (and the PIIGS) being caught in a debtors' prison. With Irish households and businesses and its banks and the government all trying to de-leverage at once from recording breaking high levels of debt, it's hard to see what's going to resource the use of any spare capacity. 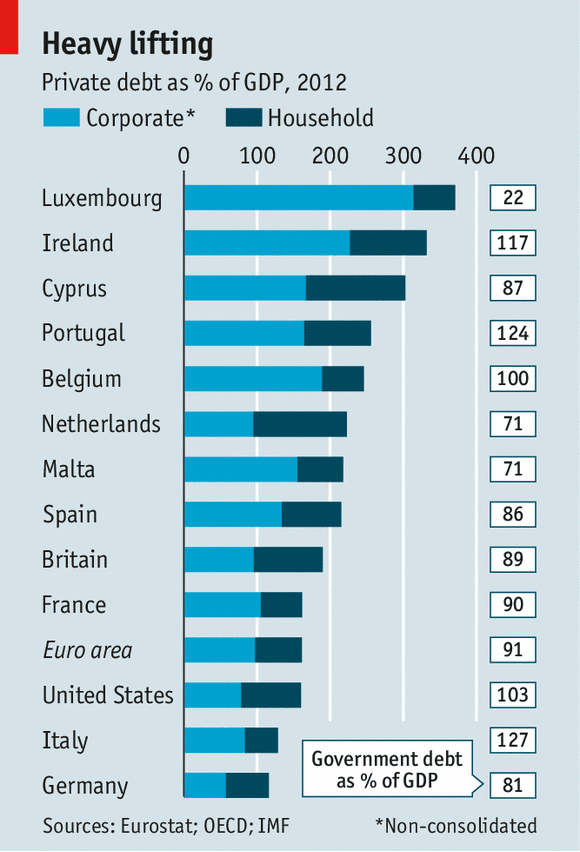 My sense of how Irish households view is the future is that they welcome any good news about our macro-economic performance as a sign that things 'ain't getting worse', but see little real change in their personal circumstances and prospects for the foreseeable future. Their future - and the entire country's at that - is foreshadowed by huge levels of debt that are unsustainable barring a prolonged period of inflation. Without the inevitable interest rate hikes.

This means that a lot of spare capacity will go unused for some time to come. It also means that any increases in consumer spending will be modest as savings rates remain high (to pay down debts), and as after tax incomes remain under pressure due to the government's own debt commitments.

We're not alone, of course. Here's John Michael Greer on what the future will hold for American citizens:


... imagine that this is your future: that you, personally, will have to meet ever-increasing costs with an income that has less purchasing power each year; that you will spend each year you still have left as an employee hoping that it won’t be your job’s turn to go away forever, until that finally happens; that you will have to figure out how to cope as health care and dozens of other basic goods and services stop being available at a price you can afford, or at any price at all; that you will spend the rest of your life in the conditions I’ve just sketched out, and know as you die that the challenges waiting for your grandchildren will be quite a bit worse than the ones you faced.

Not so much 'muddle through' as 'muddle down'. Still, no apocalypse either. And that's the point. The future doesn't owe us a living - or a better quality of life. We have to make the decisions now - as well as the sacrifices - that will avoid a 'muddle down'. But if the government starts believing its own spin (and worse, Brussels and Frankfurt become believers too), then we'll remain stuck in debtors' prison, looking out at the future that might have been.