The safest forecast to make about the near future is that it will be pretty much the same as the recent past. So for 2014 we can reasonably expect:
Still, if something can't go on for ever - as Herb Stein observed - it won't. Maybe twelve months is too narrow a frame for speculating about the things that will matter, but let's speculate a little anyway. Surprises, by definition, are just that. Nicolas Taleb coined the term 'black swan' to describe low probability, high impact (mostly negative) surprise events that can make the recent past a very poor guide to the near future, never mind the longer term.

There's no point in me speculating about black swans - by definition they're outside the frame of speculation anyway - but let me talk about a few 'grey swans'; events that some people are already speculating about which could make 2014 anything but a re-run of 2013. And I'll add a few 'grey doves' as well; some potential changes that could point us in a more positive direction.

The most obvious grey swan is the stock market (and no, I don't mean our own, sad little ISEQ). There are quite a number of indicators pointing to a bearish turn for the US stock market in 2014 - John Hampson lists just a few: 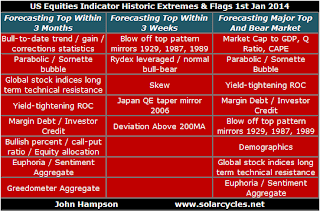 With global growth still anemic, we shouldn't be surprised if the strong recovery baked in to the bullish prices seen in many equity markets during 2013 turns out to be a tad optimistic. The resultant 'reset' could be very painful for all concerned.

China is the other (maybe even bigger) grey swan for 2014, both economically and politically. The economic uncertainty relates to its need to deflate several very large bubbles - if they burst instead then we'll all feel the shock wave. However, it isn't the economic consequences that should concern us but the military ones. Right now, China's 'selectorate' (to use Bruce Bueno de Mesquita's term) are motivated to keep the game going. But a post-bubble China might want to focus their surplus males on a new game - with the Senkaku islands row a mere foretaste.

But what about Ireland in 2014? Here I think we can look forward to a number of interesting, positive developments that will take our country in a new and better direction. Though you won't read about them in any of the mainstream media's pontifications about the year ahead. In no particular order, we can anticipate:

Peak Atheism - just as 1914 witnessed Peak Theism; one hundred years later the cycle is turning again. Maybe it's the 'Francis effect', or simply the consequence of ageing populations ('nearer my God to thee', and all that) - but the public conversation about spirituality is growing. In our post-modern age it would seem that one man's belief in the virgin birth is as valid as another's belief in the multiverse. Though don't tell President Higgins...

New Nationalism - the European elections in May will give Europeans an opportunity to tell the Eurocrats in charge of the Great Stagnation what they think. Euro-scepticism is in the ascendant, and even in Ireland we're beginning to realise that a European project which puts the interests of creditors first and debtors last is not one conducive to Ireland's best interests in the long run. Nationalism has been a dirty word for a long time (the Nazis were 'national socialists' after all), but the 1914 centenary (and 1916/2016 of course) will cause many to rethink terms like patriotism, nationality and identity in ways that will move us beyond our supine deference to Brussels and Frankfurt.

Men Matter - 2014 will be the year that the tired only feminist tropes about 'obsolete men' are finally put to rest. In fact it began last year elsewhere, but this year Irish men will have had enough of being second class citizens and one of the most disadvantaged minorities in their own country. One recent indicator - the 790 (and counting) comments on Una Mulally's predictable article on Feminism 4.0 in the Irish Times. Irish men have had enough of being lectured to, thank you.

That's it for now - may you see more doves than swans dear reader in the year ahead.