Deirdre McCloskey is worried that we have lost our virtues. In a marvelous essay published just before Christmas, she explores an economic map of virtue including the Four Cardinal Virtues (in case you forget: Justice, Courage, Temperance & Prudence) as well as the Three Theological Virtues (in case you need reminding: Faith, Hope & Love). She uses two dimensions to create her map - the Ethical Object and the Ethical Subject, thus: 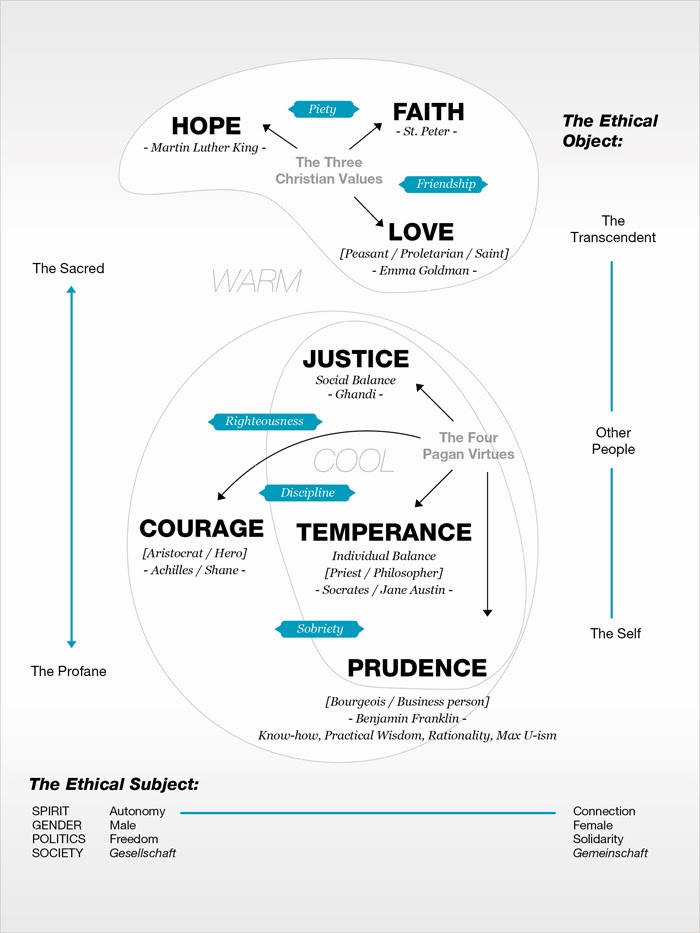 But post Hobbes and Machiavelli there emerged what she describes as the 'strange belief that a serious political philosopher had no need to be serious about ethics'. The result nowadays is that we no longer have a theory of virtue in the West, instead we have 'a new habit of making up virtues on the spot out of social theories or social graces.' Hence our contemporary championing of tolerance, equality and autonomy as the highest virtues, despite increasing evidence of their self-contradiction. Something the old virtues managed mostly to avoid.

Probably the biggest contradiction in our contemporary 'made up' assortment is that it tends to deplete moral capital rather than enhances it (diverse communities have low levels of trust and so on). As Brian Brown has noted about the Church of England's ongoing demise, social capital (including religious communities) relies on moral capital for its replenishment. He uses Jonathan Haidt's definition of moral capital:


"the degree to which a community possesses interlocking sets of values, virtues, norms, practices, identities, institutions, and technologies that mesh well with evolved psychological mechanisms and thereby enable the community to suppress or regulate selfishness and make cooperation possible."

If moral capital is depleted because 'nobody wants to be a member of a club that's so inclusive that membership means nothing' then social capital and economic capital won't be far behind.

But all is not lost. Observing the West's coming demographic winter, Regis Martin points to the obvious:


And to whom, finally, does the future belong?  It belongs to those who show up, which is to say, to the fertile.

Who has the most babies? Why the 'virtuous' of course. Back to Jonathan Haidt again: he identifies six moral 'clusters' (care, fairness, freedom, loyalty, authority and sanctity), the first three of which circumscribe the values of the Left, while the Right values all six. Loyalty, authority and sanctity are more 'family/baby-friendly' it seems than care, fairness and freedom alone.

By the way, if you're wondering where on the 'morality spectrum' you might be yourself, Haidt has a handy, 12-question survey that tells you. Apparently if you use Chrome as your browser then you're a liberal...