Still, she has a way with words:

Beginning in the eighteenth century, as the intellectual historian Dorothy Ross once pointed out, theories of history became secular; then they started something new—historicism, the idea “that all events in historical time can be explained by prior events in historical time.” Things began looking up. First, there was that, then there was this, and this is better than that. The eighteenth century embraced the idea of progress; the nineteenth century had evolution; the twentieth century had growth and then innovation. Our era has disruption, which, despite its futurism, is atavistic. It’s a theory of history founded on a profound anxiety about financial collapse, an apocalyptic fear of global devastation, and shaky evidence. ...The idea of innovation is the idea of progress stripped of the aspirations of the Enlightenment, scrubbed clean of the horrors of the twentieth century, and relieved of its critics. Disruptive innovation goes further, holding out the hope of salvation against the very damnation it describes: disrupt, and you will be saved.

As far as Lepore is concerned, our uncritical embrace of disruptive innovation is somewhat lacking in evidence or proof that it is, on balance, a good thing. Michael Hennigan (who linked to Lepore) has just finished a five part critique of Ireland's innovation strategy. Or lack thereof. It's a familiar refrain from Michael - our stated ambitions for innovation policy far exceed any real world outcomes (either in terms of indigenous, innovative firms or job creation).

In fairness to Christensen, he's well aware of the risks associated with disruption, and he sees the potential for technological malinvestment as much as for technological investment - especially in a world awash with capital. Nor do I think he would recommend Irish policy makers to put all their eggs in the innovation basket.

The real danger it seems to me is that digital disruption - as opposed to the old-fashioned process of replacing coal with oil, steam with electricity - happens much, much faster so that the 'gains' from disruption are dissipated by the next disruption before they have been embedded by the wider society. The theoretical process of disruption is illustrated below (source):

But what if the area under the curve described as 'Height of New Productivity Gain' is much flatter, quickly turning back below the line as losses return sooner than in the past?

The latest EY report on Ireland's economic prospects sets out some interesting forecasts for job creation to the end of the decade across different sectors. What surprised me was the number of new jobs they are forecasting for retailing. I don't think so. If somewhere like Blackrock is turning into a retail Potemkin Village - thanks mainly to the recession but also to disruptive technology - then the time to 'bank the gains' from innovation just might not be long enough any more.

Maybe we can take consolation from Lepore's conclusion that often it is the incumbents who gain most from technological innovation and not the disrupters:


Disruptive innovation is a theory about why businesses fail. It’s not more than that. It doesn’t explain change. It’s not a law of nature. It’s an artifact of history, an idea, forged in time; it’s the manufacture of a moment of upsetting and edgy uncertainty. Transfixed by change, it’s blind to continuity. It makes a very poor prophet.

We are all incumbents now.
Posted by Gerard O'Neill at Monday, June 23, 2014 No comments: 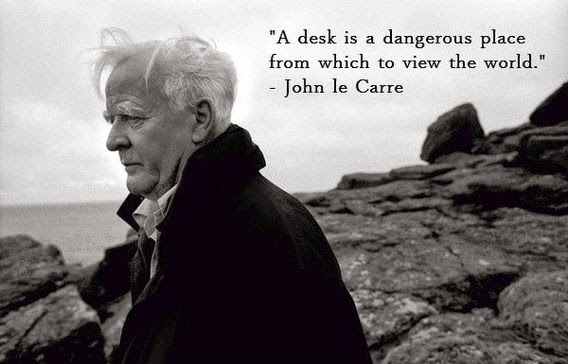 Twenty five years after Francis Fukuyama proclaimed the end of history, history appears to be speeding up. An interesting perspective from John McGinnis:

There are inherent tensions in liberal democracy that ensure that history continues. By protecting liberties, liberalism prioritizes individuals, while democracy necessarily prioritizes a collective right—the right of a people to govern themselves and impose obligations and indeed trench on the liberties of others.

In a constitutional republic such as ours, we try to resolve that tension by permitting democracy for ordinary politics while enshrining rights that are beyond majority control. But even here with a constitution that has lasted for two hundred years the mixture is unstable. Just consider current conflict between campaign finance regulation and the First Amendment. Around the world the conflict is truly combustible.

And that's just in the liberal democracies. As for Ukraine, Iraq, Syria, Venezuela, Thailand...

The ECB is now determined to do everything to assist Europe's small businesses, short of actually helping them, of course. If I could borrow from the ECB at 0.5% I might well be tempted. After all, my chances of developing a product or service that would generate returns higher than 0.5% would be pretty good, even in this economy.

But of course, I can't borrow from the ECB - no SME can. We have to borrow from the banks the ECB is lending to, which introduces a bit of a 'middle man' problem. Indeed, Chris Dillow has debated recently whether we're past the point of needing banks any more in an age of deflation, negative interest  rates and bitcoin. I've speculated about the same thing myself recently.

There may though be a bigger problem than the ECB interbank rate or the role of banks full stop. That problem is the impact lowflation/deflation is having on the real cost of borrowing for businesses. I worked it out yesterday using Central Bank data for new business loan rates (covering the two biggest categories that make up about 90% of all business loans). If we subtract the Harmonised Index of Consumer Prices (HICP) provided by the CSO from the business loan rates we get the chart below: 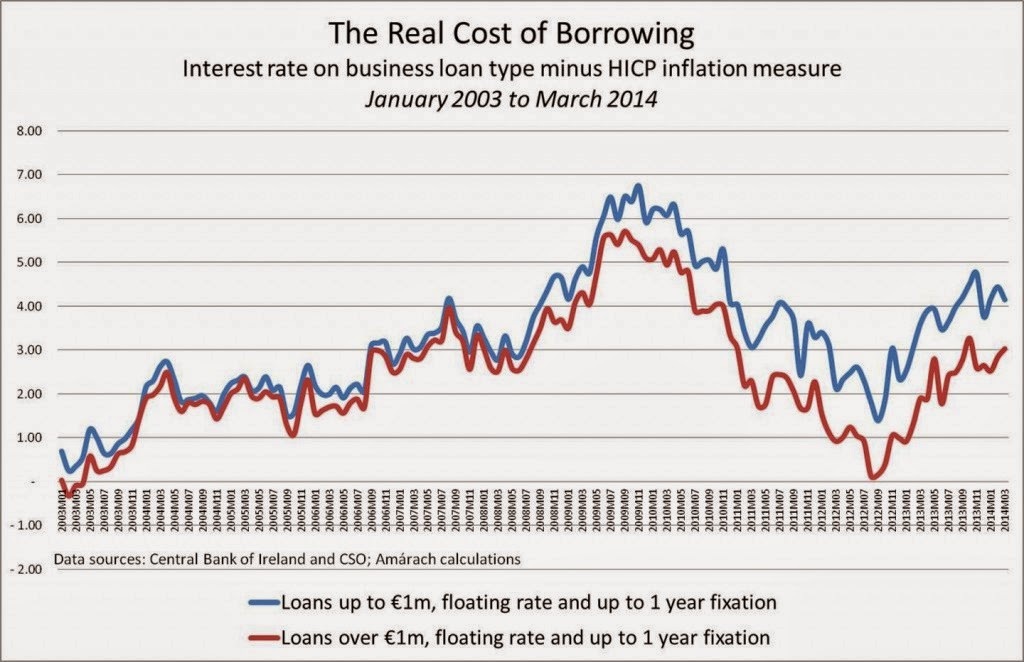 What's worrying is that real interests have been rising for nearly eighteen months, after a three year period of decline. The bottom line: if the real costs of borrowing for businesses is running at more than twice the rate of growth of the economy, then you would want to be very optimistic - or very foolish - to borrow at those rates, especially if your business is focused on the domestic market (as most invariably are).

I wonder would the ECB consider a loan application? 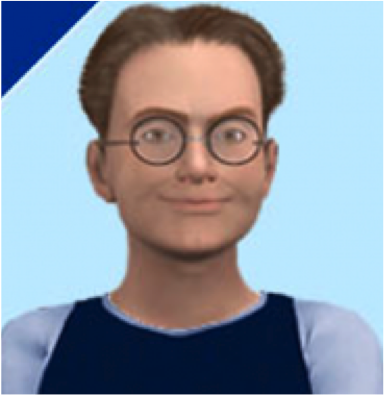 He isn't real, but he has convinced 33% of people who interacted with him that he's really a 13 year old Ukrainian. The Turing Test has been past apparently. Try it for yourself here.

Does it matter? I'm not so sure. After all, a computer that convinces you it is human is still just a computer. Indeed, the 'news' that computers are better than humans at some things isn't all that surprising. A hammer is better for putting nails in the wall than my fist. That's why we make tools: to help us do more than we could without them.

Sure, IBM's Watson can beat any human at the TV game Jeopardy, but really, so what? I am reminded of Henry David Thoreau's observation that:

"Our inventions are wont to be pretty toys, which distract our attention from serious things. They are but improved means to an unimproved end, an end which it was already but too easy to arrive at."

With socialbots convincing thousands of twitter users to follow them, I can't help feeling that Thoreau would be even less enamored with our own age than he was with his own. We are desperately in need of improved ends, and Eugene doesn't have the answer.