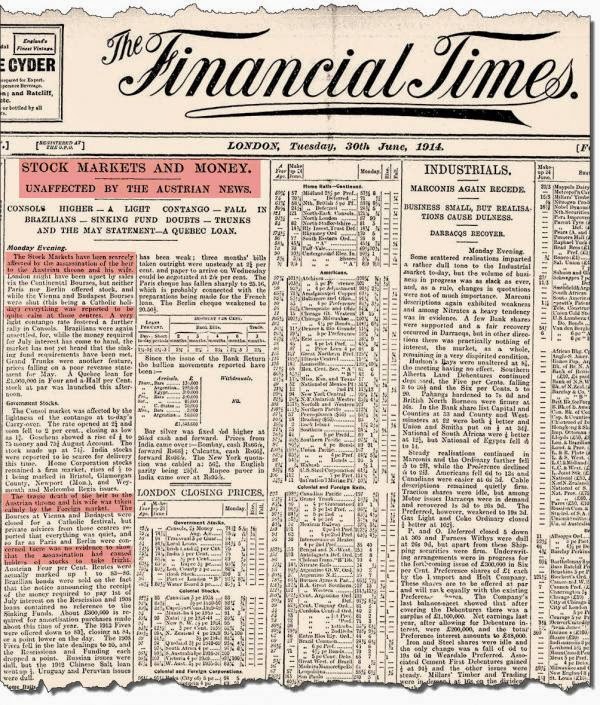 "Not only will politics certainly disappoint us, but even were it not to, the outcome would be a relatively pitiful one. Political transformation is ‘at best’ a re-ordering of primate dominance hierarchies, which everyone knows won’t actually be for the best — or anything close to it."            Outside In

There's nothing like a holiday abroad to give you a bit of perspective on things. Like, what a lucky place Ireland is compared to the rest of the world. The news abroad was all about Gaza, The Ukraine and Iraq; back home the headlines featured culchie rock stars and skobie seagulls. Oh yes, and a Cabinet re-shuffle. Yep, we're lucky.

Still, I can't help feeling that we won't remain immune from the global tide of events indefinitely - the fact that we are one of the most open economies in the world more or less guarantees that. But even if the headlines are just that - news for a day, of little import for the future - other forces will inevitably shape Ireland's destiny.

There's one I've been reading about a lot: the growing failure of 'post-recession' economies in the developed world to create jobs and provide adequate wages for those who want them - a big problem in Spain, where I was staying. A recent episode of the BBC's Analysis discussed whether we are witnessing 'the end of the pay rise'. The conclusion is fairly optimistic - technological innovation will eventually increase productivity per worker like it did before, with some of the benefits accruing to workers in the form of higher wages (and more jobs), like it did before.

Others are less optimistic: Thomas Wells thinks the rise of the Robot Economy means we need to institute a basic minimum income. Scott Alexander has even figured out a way to pay for it: take all the money wasted on educating people who graduate to unemployment by cutting to the chase and scrapping education, using the money instead to make us all 'trustifarians'. It's a tongue-in-cheek suggestion of course (I think), though his image of folks living in mountain cabins reading Aristotle is sort of appealing, if hopelessly utopian. Of course, the problem with the 'money for not working' solution is that we are currently running that experiment in the form of long-term unemployment and it isn't working all that well for either the unemployed or wider society. There might be a future in which something like Alexander's solution works, but it won't be a democratic future.

Anyway, my conservative leanings make me more inclined to look to the past for solutions rather than to the future. Perhaps we need to 'go medieval' if we want the work-life balance to be one that works for society as a whole, and not just for individuals? The average peasant in 14th century England worked just 150 days a year on account of all the holidays, feast days and week-long celebrations of births, weddings and funerals. I've suggested before that we should have a goal in Ireland of establishing the four day week as a norm, adding bank holidays - and holy days - to the calendar over, say, a 10 year period.

I'd suggest it for consideration to our local politicians only, well, they're on holiday - again. Maybe they've worked out a solution to jobless/wageless recovery and haven't got around to sharing it with us yet?