You know Europe's economy is in a bad way when even the mafia is a shadow of its former self.

The timing is terrible, of course, as some had hoped GDP would get a handy fillip from the inclusion of illegal activities.

Proof, if proof was necessary, that poor old Europe can't get a break these days...

Every Assistance Short of Help

Is the ECB about to go QE? We await with breathless anticipation.

Today's appointment of BlackRock to help the ECB design a programme to buy asset-backed securities (ABS to give it its full acronym) has been interpreted by many as a sign the eurozone will soon witness full blown quantitative easing. And needless to say, it's all being sold as really really good for Europe's small businesses still desperate for bank finance to help expand and create jobs. Why, I'm sure it'll even reduce our carbon footprint as well, come to think of it.

Of course, it's all BS (another acronym). Apparently, in order to get the banks to lend enough money to businesses (with a modest margin added for profit), the ECB has to (sharp intake of breath) get the banks to bundle existing loans into securities that are sold to fixed-income investors (in this case, the ECB) so that the banks will then have better balance sheets which in turn will enable them to raise low interest rate funds in order to be able to lend money to SMEs. Or at least I think that's the plan. The fact that the whole 'mortgage-backed securities'/QE thing has been tried and failed in Japan, the United States and the UK (from a lending to SMEs/sustainable growth point of view) should not in any way be considered a reason not to try it in Europe too.

Needless to say there are many people in favour of QE. Like the executives in charge of large corporations who have used QE to indulge a binge of share buybacks to boost the value of their own share options, which has in turn exacerbated the wealth inequalities many people seem vexed about. Apparently this is a much safer bet for the banks than taking their QE gains and, you know, actually lending money to businesses who need to it to grow.

A case, once again, of 'every assistance short of help' for Europe's small businesses.

Still, it's not too late to consider the alternative. Like giving the money directly to the people. Even Foreign Affairs thinks this might be worth trying. A sort of 'QE for the people'. As Mark Blyth and Eric Lonergan explain it:


Rather than trying to spur private-sector spending through asset purchases or interest-rate changes, central banks, such as the Fed, should hand consumers cash directly. In practice, this policy could take the form of giving central banks the ability to hand their countries’ tax-paying households a certain amount of money. The government could distribute cash equally to all households or, even better, aim for the bottom 80 percent of households in terms of income. Targeting those who earn the least would have two primary benefits. For one thing, lower-income households are more prone to consume, so they would provide a greater boost to spending. For another, the policy would offset rising income inequality.

But the problem in Ireland is that most of the money will simply go to paying off debt, with only a limited impact on spending and growth (which would help most SMEs dependent on the domestic market). Which means that QE for the people requires another, even more radical policy if the nation's debts are to be reduced. And there's only one way to do that: DF.

DF is an acronym that stands for the thing that will have to happen anyway in Ireland, the eurozone, the UK and the United States. And the sooner the better. DF stands for:

Though probably not before Europe's executives have enjoyed their own share buyback binge. Europe's small businesses will just have to wait their turn.

Stringing Up the Recovery

Like a lot of people I'm scratching my head at the conflicting statistics about Ireland's economic performance. On the one hand, the latest QNHS from the CSO tells us that the numbers in jobs were 1.7% higher in Q2 2014 than a year ago. On the other, the CSO also reports that average weekly wages were down 1.1% in Q2 2014 from last year. It's a wage-less recovery apparently.

There may be several explanations for what we are seeing - or there may be none. Such low percentage figures, based on survey data, are in turn vulnerable to margins of error that could leave one or both in reality close to zero. I used to think we witnessing a 'macro-recovery, micro-recession' - i.e.: improving headline numbers like GDP and exports, but weaker indicators at the level of firms and households. Now it seems the other way round, with the macro numbers remaining flat and the micro numbers (job creation/confidence) showing improvement.

I think these anomalies are further signs of our continuing balance sheet recession. In other words, despite a degree of pump priming by the authorities, and even some old fashioned boosterism by the media (and who can blame them), we're still coming to grips with what happens when you try to push on the monetary string. The number one financial priority for the majority of Irish adults is to reduce their exposure to debt. It's less of a priority for the very young and the very old, but then they tend to have both low debts and low incomes. Those with higher incomes - the 35-55 age cohort - are also more indebted, so any extra spending power/disposable income they get will only go one way.

But to add to the head scratching, the latest money supply statistics are enough to make your nearest and dearest wonder if you've picked up something contagious. The chart shows what is happening to the M1 and M2 measures of money supply in Ireland (data here). They tend to move together, but since the start of the year, M1 (currency in circulation and overnight deposits) has moved away significantly from M2 (M1 plus longer term deposits): 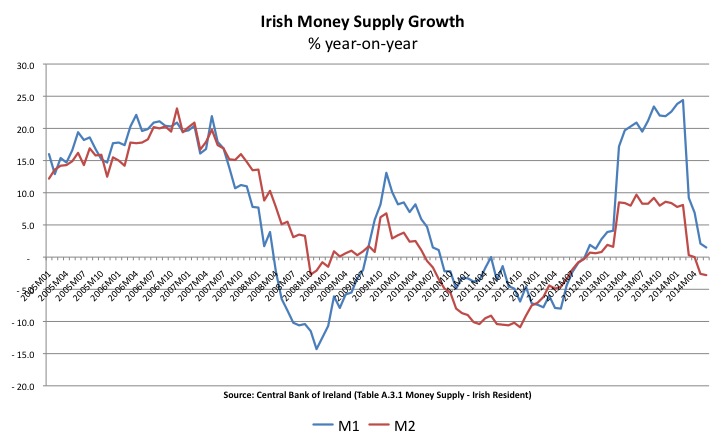 The source of the jump is the amount of currency in circulation (not overnight deposits, which are flat). In June 2014 there was €14.5bn in 'cash' circulating in the Irish economy, up 10% from a year ago to  reach the highest level on record. Sure looks like a lot of pump priming to me. The only question is: whose pump(s)?

It certainly isn't showing up in residential bank deposits, nor in wage packets for that matter. It may simply be more proof of the degree to which our financial system remains fractured and broken after the collapse six years ago. Or it may indicate that the wider economy is still very vulnerable and that recovery is still some way off for most of those seeking jobs, or waiting for pay rises for that matter. Despite an awful lot of pushing on string.

Worried about the impact of technology on your job security? You should be. This is worth the 15 minutes:


This is also the basis of my support for a basic income guarantee. Imagine an employment waterline, gradually rising through higher and higher levels of competence. In the distant past, maybe you could be pretty dumb, have no emotional continence at all, and still live a pretty happy life. As the waterline rises, the skills necessary to support yourself comfortably become higher and higher. Right now most people in the US who can’t get college degrees – which are really hard to get! – are just barely hanging on, and that is absolutely a new development. Soon enough even some of the college-educated won’t be very useful to the system. And so on, until everyone is a burden.

...By the time I am a burden – it’s possible that I am already, just because I can convince the system to give me money doesn’t mean the system is right to do so, but I expect I certainly will be one before I die – I would like there to be in place a crystal-clear understanding that we were here first and society doesn’t get to make us obsolete without owing us something in return.

By the way, that video was launched on YouTube just three days ago - it has been viewed 1.3 million times already. Looks like it struck a nerve with some folk.