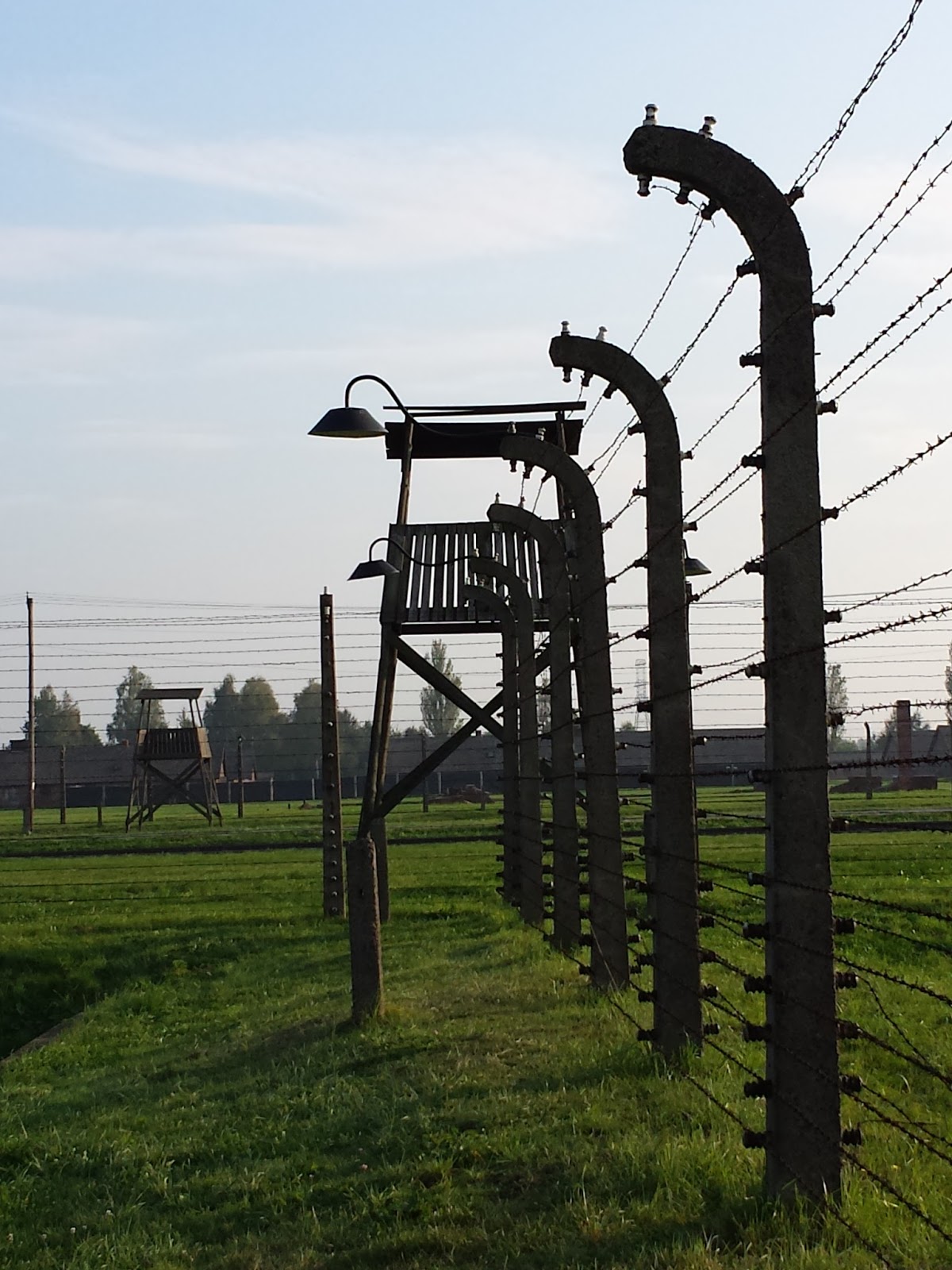 "Really, Doctor Cors, the evil to which even you should have referred was not suffering, but the unreasoning fear of suffering. Metus doloris. Take it together with its opposite equivalent, the craving for worldly security, for Eden, and you might have your 'root of evil', Doctor Cors. To minimize suffering and to maximize security were natural and proper ends of society and Caesar. But then they became the only ends, somehow, and the only basis of law - a perversion. Inevitably, then, in seeking only them, we found only their opposites: maximum suffering and minimum security."
From A Canticle for Leibowitz by Walter M. Miller Jr.

A recent break in Krakow, Poland took me on a day trip to Auschwitz. It left a lasting impression. As I walked around the huge complex of Auschwitz-Birkenau, which at its 'peak' employed some 7,000 people, I kept thinking of Hannah Arendt's comment on the 'banality of evil'. She was not suggesting - as her detractors unfairly inferred - that the industrial scale mass murder that took place in the extermination camps was somehow trivial. Far from it. She was simply trying to grasp how evil on such a scale could happen and the answer was obvious:


The sad truth is that most evil is done by people who never make up their minds to be good or evil.

There are plenty of psychopaths and sociopaths in the world, but not enough to run a death camp. Indeed, as Kevin Hart observes in a magnificent, two part series on the implications of evil for the 21st century on ABC's RN (easily the smartest religious programme in the English language):


The Holocaust, Auschwitz was the great passion of the Jews, as Emmanuel Levinas says, and in completely agreeing with that I would add that it is a passion also, or should be, for Christianity. The most horrifying thing for Christians, it seems to me, the twentieth century, is the thought that the people who murdered Jews in a mechanical way at Auschwitz all knew their Catechism.

The two part series also features Ireland's greatest living philosopher-in-exile Richard Kearney. Well worth the listen for that alone (although there's much, much more besides).

Another philosopher, John Gray, has recently analysed the problem that modern, liberal societies have with evil:


In its official forms, secular liberalism rejects the idea of evil. Many liberals would like to see the idea of evil replaced by a discourse of harm: we should talk instead about how people do damage to each other and themselves. But this view poses a problem of evil remarkably similar to that which has troubled Christian believers. If every human being is born a liberal – as these latter-day disciples of Pelagius appear to believe – why have so many, seemingly of their own free will, given their lives to regimes and movements that are essentially repressive, cruel and violent? Why do human beings knowingly harm others and themselves? Unable to account for these facts, liberals have resorted to a language of dark and evil forces much like that of dualistic religions.


In Europe religion was a primary force in politics for many centuries. When religion seemed to be in retreat, it renewed itself in political creeds – Jacobinism, nationalism and varieties of totalitarianism – that were partly religious in nature. Something similar is happening in the Middle East. Fuelled by movements that combine radical fundamentalism with elements borrowed from secular ideologies such as Leninism and fascism, conflict between Shia and Sunni communities looks set to continue for generations to come.

Bad news for the Middle East, but surely irrelevant to us in the secure and comfortable West? Surely we are immune to the virus of politics-inspired evil? Surely not, for as the infamous Milgram Experiment back in the 1960s illustrated, ordinary people can be persuaded by others in positions of authority - the experts in white coats - to do harm to others, even up to the point of, apparently, killing them. Nor was it just about authority. Recent analyses of feedback given by participants in the experiment (those 'duped' into thinking they had electrocuted others, even to death) showed not remorse, let alone horror at what they had done, but rather an exhilarating sense of belonging to something bigger and more important than their own, mundane lives: in doing their bit for science and for mankind. What would you be willing to do for the great project of Science and for Mankind?

The question I have asked myself since visiting Auschwitz is: could it happen again? Nowadays we don't even know our Catechism. Our contemporary culture of relativism might make it harder for a 'Hitler' to get going, but might make it even harder to stop him if he did. Which is why Angus Kennedy thinks we need a renewed focus on morality:


What has emerged from the wreckage of traditional, ‘bourgeois’ morality is not – despite appearances to the contrary – liberation from stultifying moral orthodoxy and routine like some butterfly from a wheel. Rather, the waning of the force and authority of traditional morality was itself a precondition for the emergence of non-judgementalism. That is to say, the seeming strength of today’s non-moral code is an illusion caused by the weakness of any alternative. Traditional morality has no more bite than the teeth of the Cheshire Cat. What is left is at best a morality of repudiation, verging on moral nihilism, espoused by moral nothings in a discourse in which nothing means very much at all. This is a moral mirror world in which it appears as if the virtuous ones are those who have liberated themselves from the moral strictures of society, but in which the real truth is that society is deeply troubled by the idea of genuinely individual judgement, of being moral. What passes for virtue today is really the pretence that one has escaped at last from oneself.

Morality, of course, implies an understanding of the Good as opposed to Evil. Therein lies the real challenge for the 21st century if we are to avoid re-visiting the horrors of the 20th.  In the absence a compelling vision of the Good - and all that implies for how we must live and how we must treat one another - then a vacuum is created, in our society and in our hearts. We need a vision of the Good that is about more than avoiding suffering and craving security. Otherwise the fences we build will soon become our prisons.